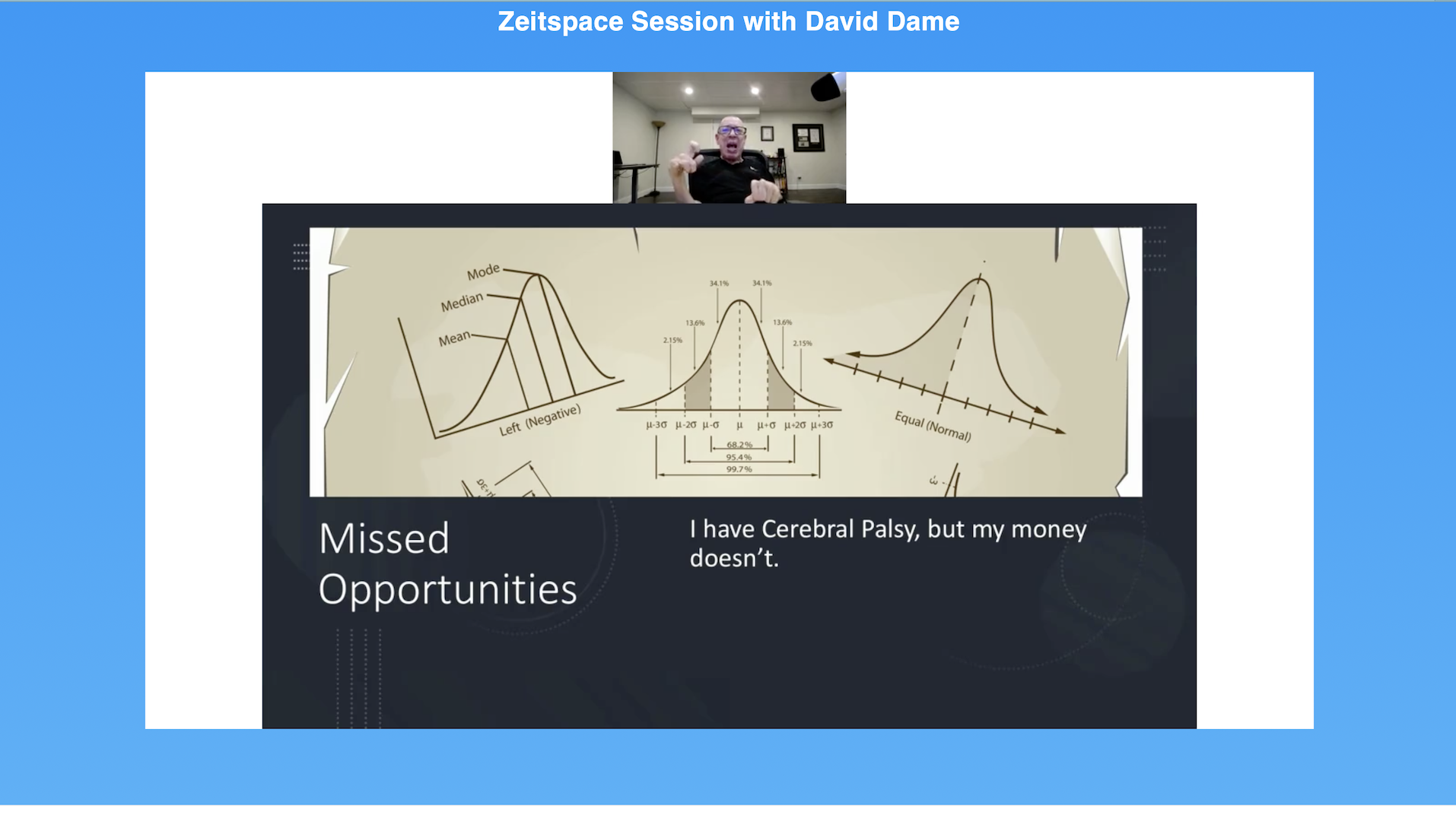 Building a new product? Here’s a gold mine of opportunity

Eight months after he graduated from the University of Waterloo, David Dame finally got his first job.

Dame had several interviews before he landed that first role as a logistics training coordinator in the automotive industry, but he either couldn’t get into the building with his power wheelchair or couldn’t navigate the hallways because they weren’t wide enough.

And when he did get his first job, it was so paperwork heavy that it took him 12 hours a day to finish what his able-bodied peers could do in eight.

When he was one of the first people to get a personal computer on his desk, Dame spent his weekends designing a website where he could map people to the cities and towns where they lived and sign them up for training. Eventually what was taking him 12 hours a day only took him three.

“Let’s be honest: It wasn’t that I was smarter than everyone else. It was that it was a problem for me first because of the mismatch in my environment to accommodate my cerebral palsy. So it became a problem for me to solve. I originally did it so I could be home in eight hours, but it created a greater efficiency,” said Dame, who’s now Microsoft’s director of accessibility.

That story was just one of many that Dame shared in a recent Zeitspace Session about how he created a new innovative (and inclusive) process for the organization he was working for at the time just by building something that worked for him. During the session, called Product innovation is on the edge, Dame offered other examples about how product professionals and designers could find new problems and opportunities to solve just by looking beyond the average user.

That’s what Dame means when he pushes product managers and designers to design on the edge. The gold mine of opportunity rests with looking at where mismatches are happening, often with people with disabilities who have to find work arounds for inaccessible products.

If Dame hadn’t joined that logistics workplace, he said it would’ve never changed its process because no one else needed to figure out a way to use technology to work faster, said Dame.

“When everything around you is the same there’s no real interest to change it because we assume that’s just the way things are,” he said. 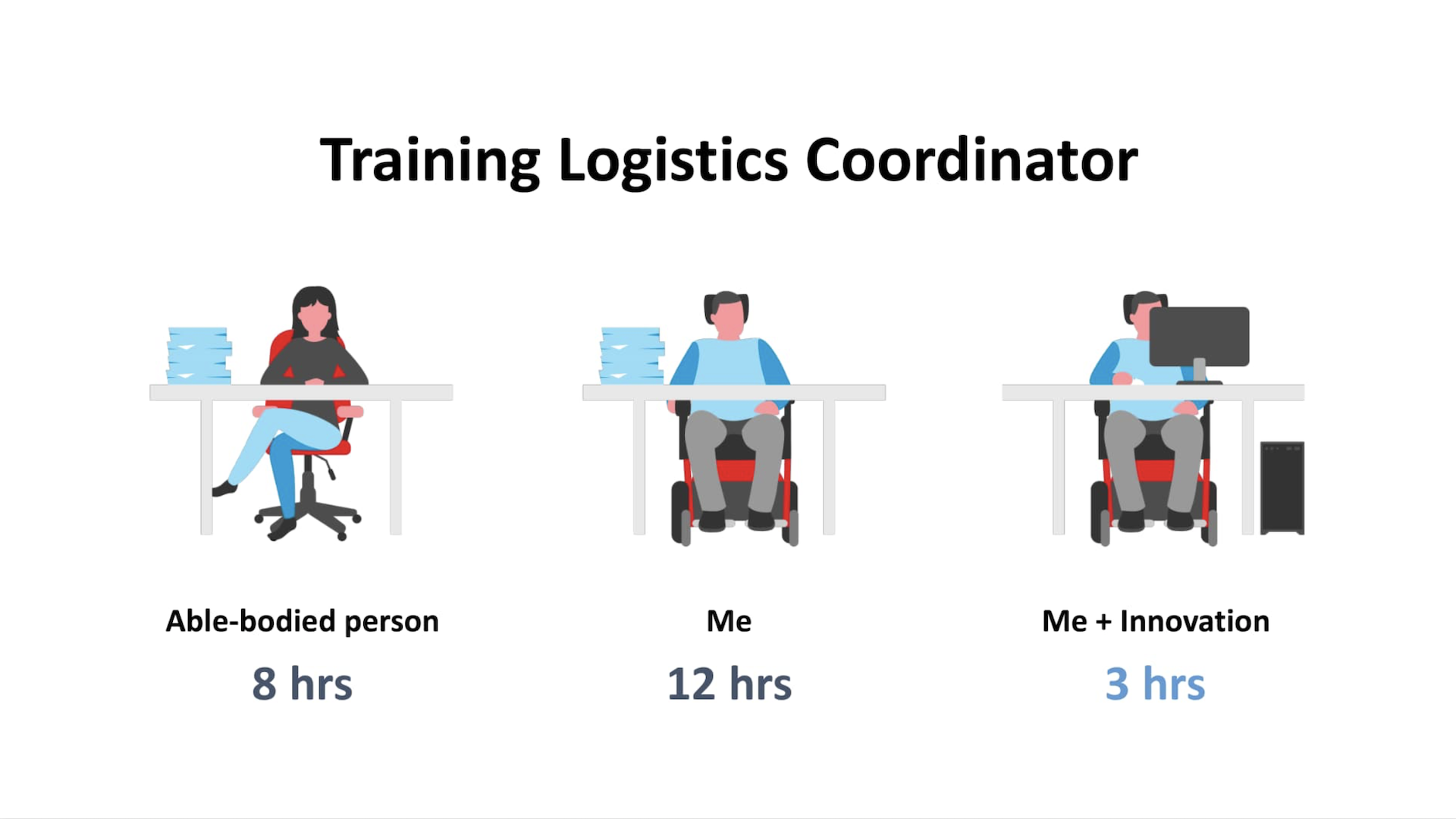 (A drawing of three people sitting at separate desks. The first is an able-bodied person who finishes their workday in eight hours. The second is David Dame, with a stack of paper on his desk who finishes in 12 hours. The third is Dame with a computer on his desk, who now finishes work in three hours because of innovation.)

But innovation happens when we look at the world in a different way.

When the first iPhone was released it was a slab of glass, making it hard for some people to use. But the second version had built-in accessibility, such as voice commands — an innovation most people use today.

Why is innovation so hard?

Product professionals are always told to create products that either solve user problems or take advantage of opportunities, Dame said. But it’s not always easy to see an opportunity. When product people and designers consider assistive technology and designing on the edge though, the mismatches that lead to innovation become clear, said Dame.

“Those mismatches are an opportunity to build a product that makes people’s lives easier,” he said. 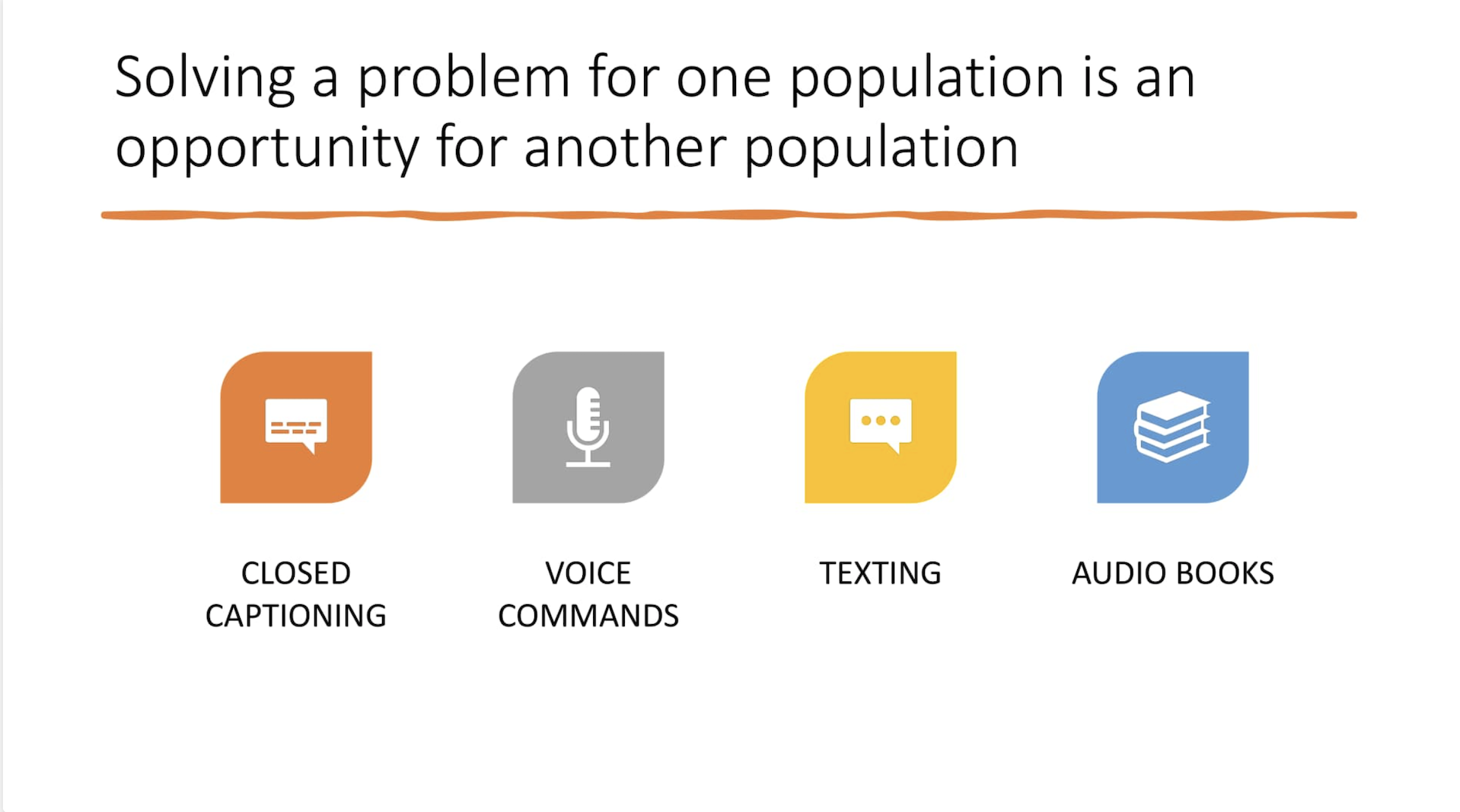 (Four icons of closed captioning, voice commands, texting, and audio books. Text across the top: Solving a problem for one population is an opportunity for another population.)

But one way designers and product people can design on the edge is to build more cognitive diversity into their organizations. Cognitive diversity — having people with different abilities and experiences as you build and design products — helps you see those mismatches and is key to helping you build innovative products, said Dame. Great teams have multiple perspectives that help move an idea from good to great.

First start with designing and building for one mismatch, validate it, and continue the cycle until you have many and then decide what should be common, he added.

How to get buy-in from the top

More than a legal requirement, Dame said one way to get buy-in from the top when you want to design for people with disabilities is to focus on business opportunity.

By 2030 there’ll be two billion people in need of assistive technology.

“Look at that market opportunity,” he said.

And it’s no longer good enough just to do the bare minimum so you don’t get fined.

“I used to be kind of unique in the workplace but now there’s lots of people with different abilities and they have disposable income, they work in different organizations. There’s money to be had and there’s learning to be had. And really we have to think about it as any other demographic,” he said.

When you design for the outliers, you still get everyone in the middle, he added.

“We’re usually told to go for 80 per cent of the users because we have to get our product out there, test it, use it, and see it. But if we focus on the other 20 per cent, whatever we solve for them is naturally going to work for everyone else,” said Dame.

If you’re still struggling to get buy-in from the top, Dame suggested simulating an experience for your organizational leadership, such as placing them in a room where it’s hard to see or hear well. Simulating a specific situation helps people understand the need to build for these mismatches.

During the pandemic many people got to empathize with what it was like to live with a mismatch because we had to think differently about how to bank, work, order food and do groceries.

“I truly hope we all remember the empathy of what we all went through as we’re building new products and new features,” said Dame. “People always think, ‘Oh let’s build accessibility into our features,’ rather than making sure their features are accessible. It sounds very similar but is very different.”

How UX designers can survive in a wicked environment

Not building products with your community? You should. Here’s why.