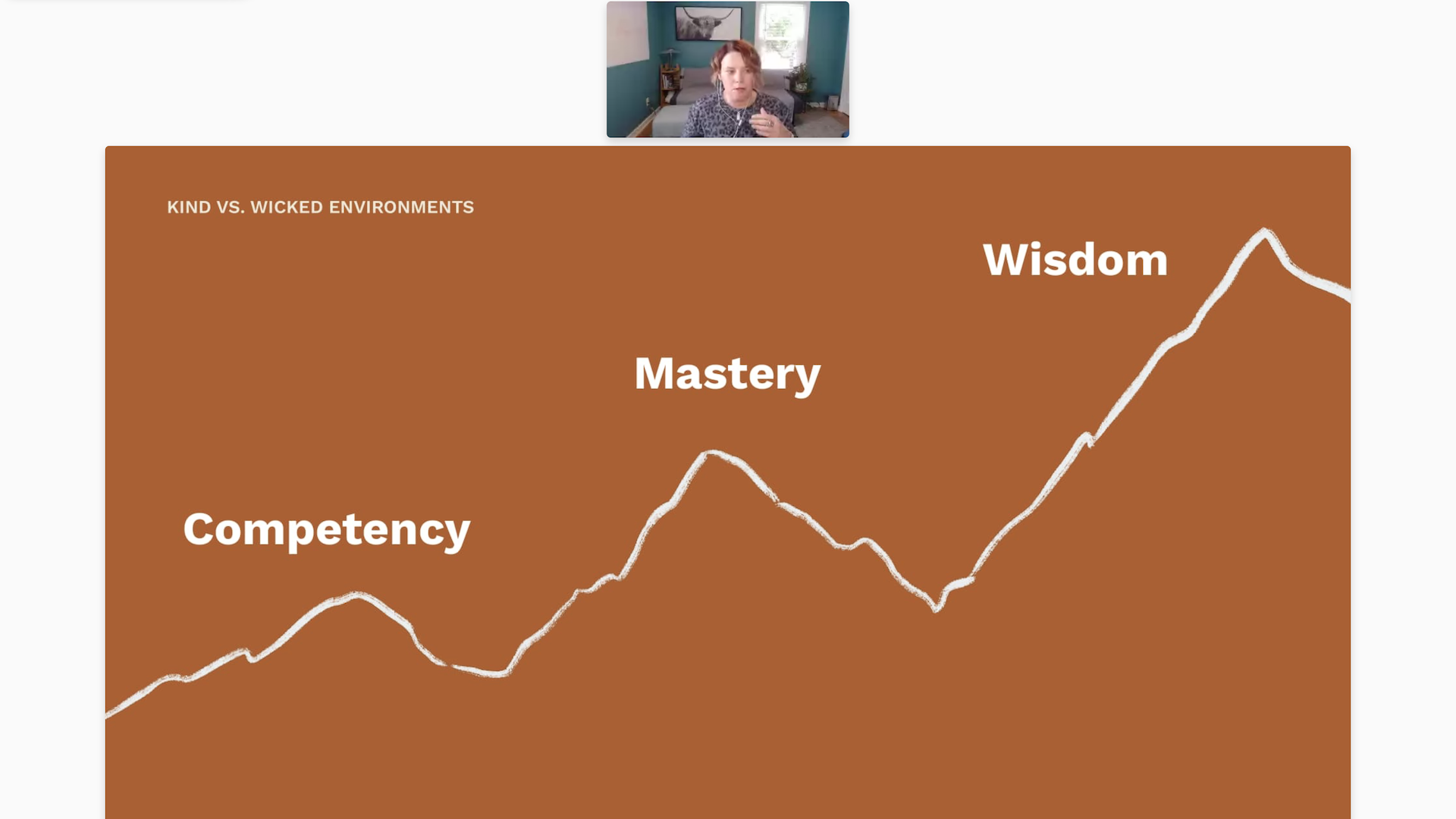 How UX designers can survive in a wicked environment

In 2019, Karen VanHouten’s life was a ball of stress. The U.S., where she lives, was a mess, her work was a mess, the relationship she was in at the time was a mess. So VanHouten did what she always did when she started to shift into an unproductive tailspin: She headed to New Mexico, saddled up a horse, and went on an endurance ride, climbing a mountain.

VanHouten had done more challenging endurance rides before than the one in New Mexico in 2019, but something in her broke down on that trail.

“I thought I was five minutes away and it took me another hour to get to the top of that trail,” the user experience (UX) design and product strategist who has worked in tech since 1993 said during a recent uxWaterloo virtual meetup.

When she got to the top, exhausted, VanHouten realized something: She wasn’t done. She had to go back down, looping around the massive boulders and loose rocks, a journey harder than the one she had just completed.

“Something broke in me. I could not get off that mountain fast enough. I have never so desperately wanted to be done with a hike,” said VanHouten.

When she finally got back to her car, covered in sweat and tears, she thought: Why do I do this to myself?

“I had been looking for a breakthrough but instead what I got was a breakdown,” she said.

Working at higher altitudes makes everything harder, said VanHouten, and the problem with training at sea-level is that it doesn’t prepare you for the thinner air you come across the higher you climb. In short, the environment VanHouten said she faced at the top of that mountain was very similar to the environment many designers face in the industry today: They’ve trained at sea-level for one type of work experience but find themselves climbing in an environment they didn’t train for.

She likens it to the concept of wicked versus kind environments found in the book Range by David Epstein, where the skills and training required for one environment, won’t work in the other. In kind environments the rules are clear and articulated, the situations are consistent and the feedback is immediate. Kind environments are best suited for specialized training.

“A computer can learn to play chess well enough to beat a grandmaster because chess is an extremely kind learning environment,” said VanHouten.

But most of the work that UX or product people do is knowledge work, which falls into the wicked domain, said VanHouten. In wicked environments, the rules aren’t clear, or don’t exist. There may be no patterns to leverage. And feedback, if it comes at all, is often delayed and unreliable.

The problem is that many designers try to navigate wicked environments using practices they learned from kind environments.

And that made VanHouten wonder: What would it take to be wicked good?

She took that question and turned it into another journey, a soul searching one about how user experience designers can get wicked good in an environment that often isn’t. She talked about the results of that journey and the insights it brought with it during August’s uxWaterloo.

How designers can go from barely surviving to thriving

The UX industry seems to be set up for failure and eventual burnout, said VanHouten, but there is a way for designers to move from barely surviving to sustainability in their careers. Part of that starts with making work spaces more inclusive environments that encourage intentional design decisions, and choices about career paths that may at first seem like a winding course.

“People who have a lot of success in wicked environments often have more meandering career paths just because being wicked good isn’t just about being good. It’s about being able to endure long enough to build that wisdom needed to excel in these types of environments. It’s not just about growth but enduring and sustainable growth,” said VanHouten.

One of the best ways to train to be flexible and adaptable in a wicked environment is by sampling different careers, she said. Maybe you started out in visual design or the video game industry and then moved into UX, she suggested. After sampling, UXers will often begin to focus on specific areas they like best.

“Working in the mastery stage is about falling in love with the process of our work, not the outputs of it,” said VanHouten.

Mastery requires a comprehensive set of knowledge skills. And the ability to think and act using that knowledge is what leads to wisdom, said VanHouten. Wisdom is about leveraging your instincts, she said, so when you get lost along the way, you’ll still be able to figure out where you need to go.

“Navigating in the wicked domain requires us to develop an instinctual sense of direction,” she said.

Often when we start new pursuits or careers we get caught up in getting the right gear: the right kind of clothing or the right kind of design tools. In UX that could be Sketch, Figma, permanent markers and sticky notes, and the templates and frameworks that designers use. While the tools are important, they're there to support designers on their journey — they’re not the purpose of the journey.

“Your gear isn’t what makes you a designer, it's the value and impact that you’re providing,” she said.

Be willing to change course

Often you can’t train for every scenario you’ll face in the course of your work. But you can develop what VanHouten calls foundational fitness: things you can count on, like strength, endurance and flexibility.

“When I struggle at work, the things I always fall back on are collaborating with other people because they’ve never failed to help me,” she said.

But even with proper training, sometimes you end up in over your head. And that’s when you have to be willing to change course. There’s a difference between making a wrong turn and getting lost and charging ahead when you’re headed in the wrong direction and falling off a cliff, she said.

“Wisdom is knowing when to push and when to pivot. Ask yourself: What outcome am I hoping for and is this stuff that is likely to get me to my outcome? Is there another route that’s easier? If so, then take it,” said VanHouten. “Do hard things because they’re the things that stand between you and the outcome you want. Do not do hard things for the sole reason that they’re hard. That’s hustle culture and it’s toxic, not to mention privileged.”

One reason hustle culture exists is because so many people find their validation through work. It’s fine and healthy to want to do good work and get recognized for it, she said. But VanHouten urged those at uxWaterloo to know they have inherent value and worth that has nothing to do with their resumes or salaries. When designers recognize that they start to say no to things that don’t align with their principles. That’s when designers get more balance in their lives. 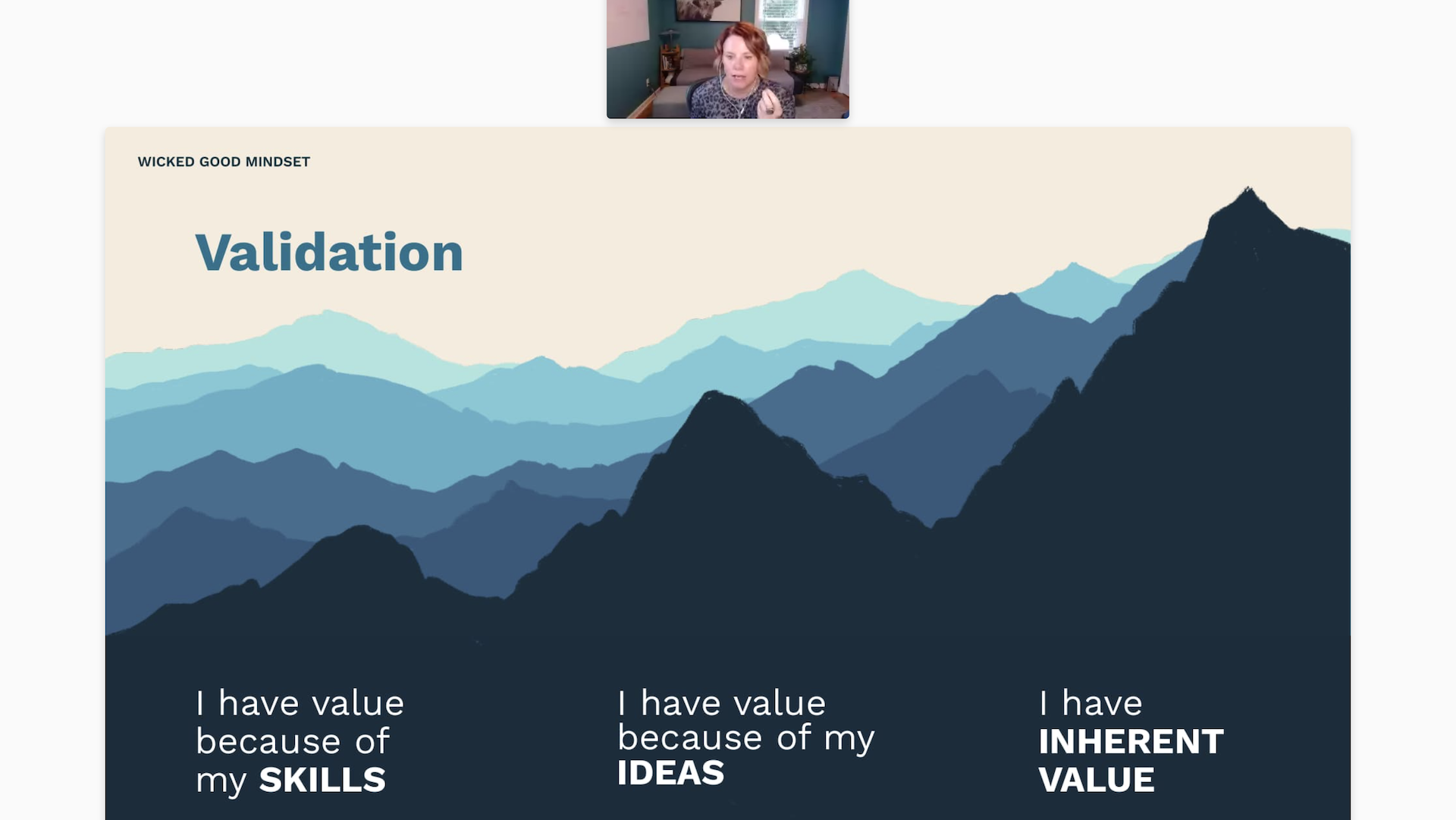 There have been small shifts in restoring balance to our environments. VanHouten pointed to Arlan Hamilton of Backstage Capital as one example. Hamilton, who started Backstage Capital while homeless, is changing the venture capital model, prioritizing overlooked entrepreneurs.

View your job as doing what's right, not what you're asked

Small shifts and changes can have an impact when they’re layered together. VanHouten said one small shift she’s made is to bake in accessibility work in all of the projects she sells rather than have it as an optional line item for clients. “That means I start viewing my job as doing what is right, not necessarily what I’m asked to do,” she said. “We often dismiss small efforts like this because the promise of big sweeping transformations are so incredibly appealing and sexy but rarely successful.”

But when we want to tackle big messes, we should start by thinking about how to do it slower, and smaller. Because the best way to get wicked good, said VanHouten, is to be wicked kind.

Building a new product? Here’s a gold mine of opportunity