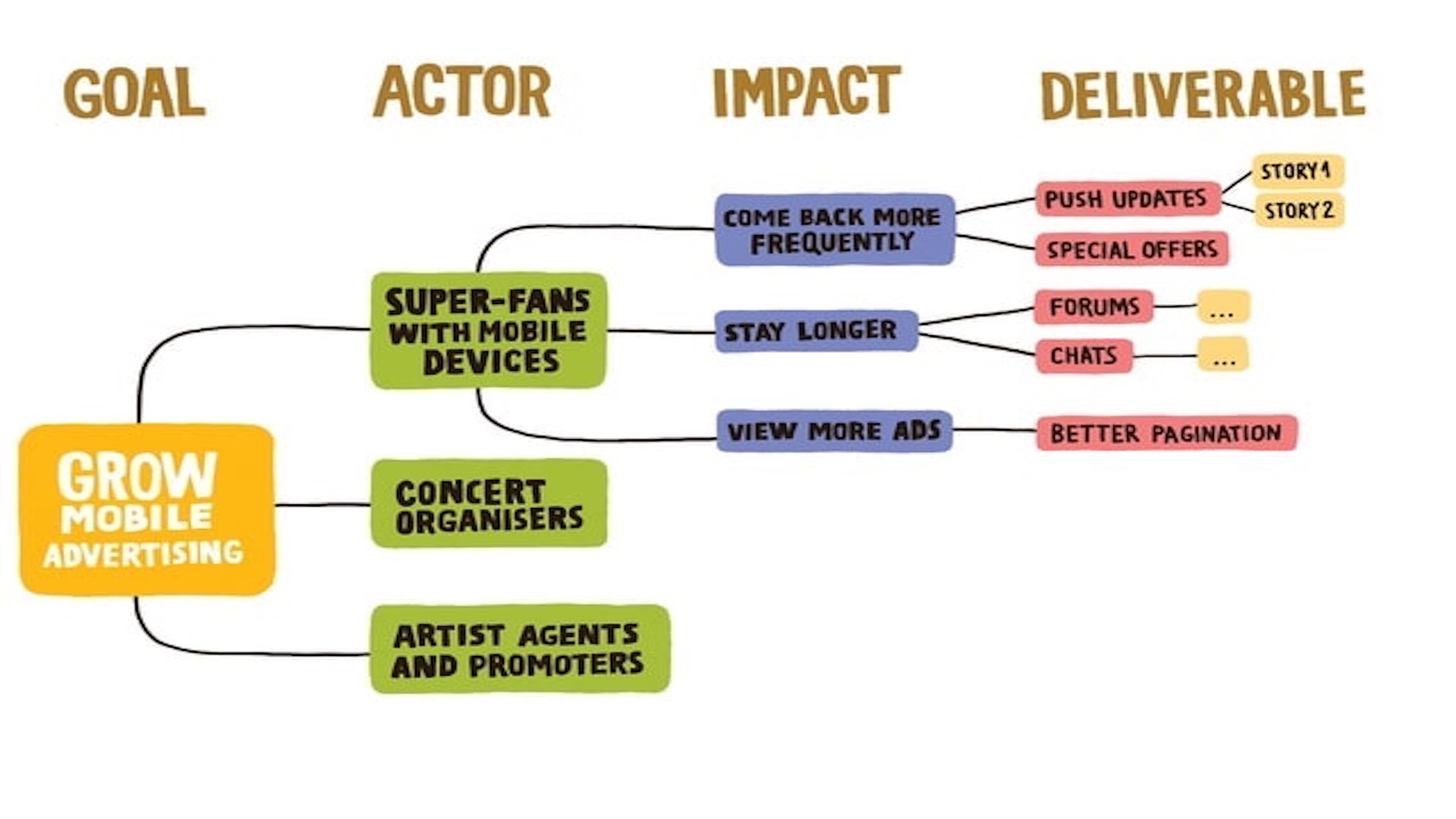 Have you ever worked on a project where it was hard to get the stakeholders aligned on whether the way you’re approaching a new product development is the right one? Someone wants a button on the new product to be blue, someone else wants it square. But are any of those decisions adding business value, or generating the outcomes you want?

Impact maps are a great way to get everyone aligned so you’re not wasting time making the wrong decisions when it comes to your product goals. During our October and November Zeitspace Sessions, we explored the benefits of impact maps and how to get started with putting together your own.

How impact mapping can help you make better decisions

Impact mapping is a visual mapping technique for software product development. Gojko Adzic invented impact maps as a strategic planning technique to help stakeholders and product delivery teams gain a shared understanding of business objectives, their connection to deliverables, and encourage roadmaps that we can easily adapt when we learn something new.

Impact maps use design thinking principles to encourage product managers and business people to focus on outcomes rather than features.

As humans we tend to focus on features, but impact mapping tries to stop scope creep and focus teams on business value rather than features that the sales team or CEO may want. Impact maps encourage you to look at your product in a different way, because it strips away organizational hierarchy and lets team members have a conversation about how the list of deliverables is connected to the bigger goals of the organization. If you can’t show impact with a specific deliverable, then that helps the team question whether they should have that deliverable on their list in the first place.

Best of all? Impact mapping is an easy technique to learn, and one you can use in your own organization with good results.

In our workshops, we broke participants up into two groups and asked each group to develop a roadmap for building an iPhone app for an online concert platform. They also had to identify key behaviour changes they wanted to see in their audience along the way. Then, we took them through the steps of building an impact map based on the product owner’s larger goals, and asked them to develop a release plan based on their impact map. For the purposes of this exercise, Zeitspace partner Jeff Fedor and Zeitspace software engineer Liam Yeates acted as the product owners.

Rather than wait two years to launch the app, the online concert platform owners wanted to deliver it iteratively, so we asked each group to plan four or five iterations in their roadmap. We also asked the groups to brainstorm behaviours they wanted to change in both customers and artists on the platform, such as having customers use the app longer or buy more expensive tickets. 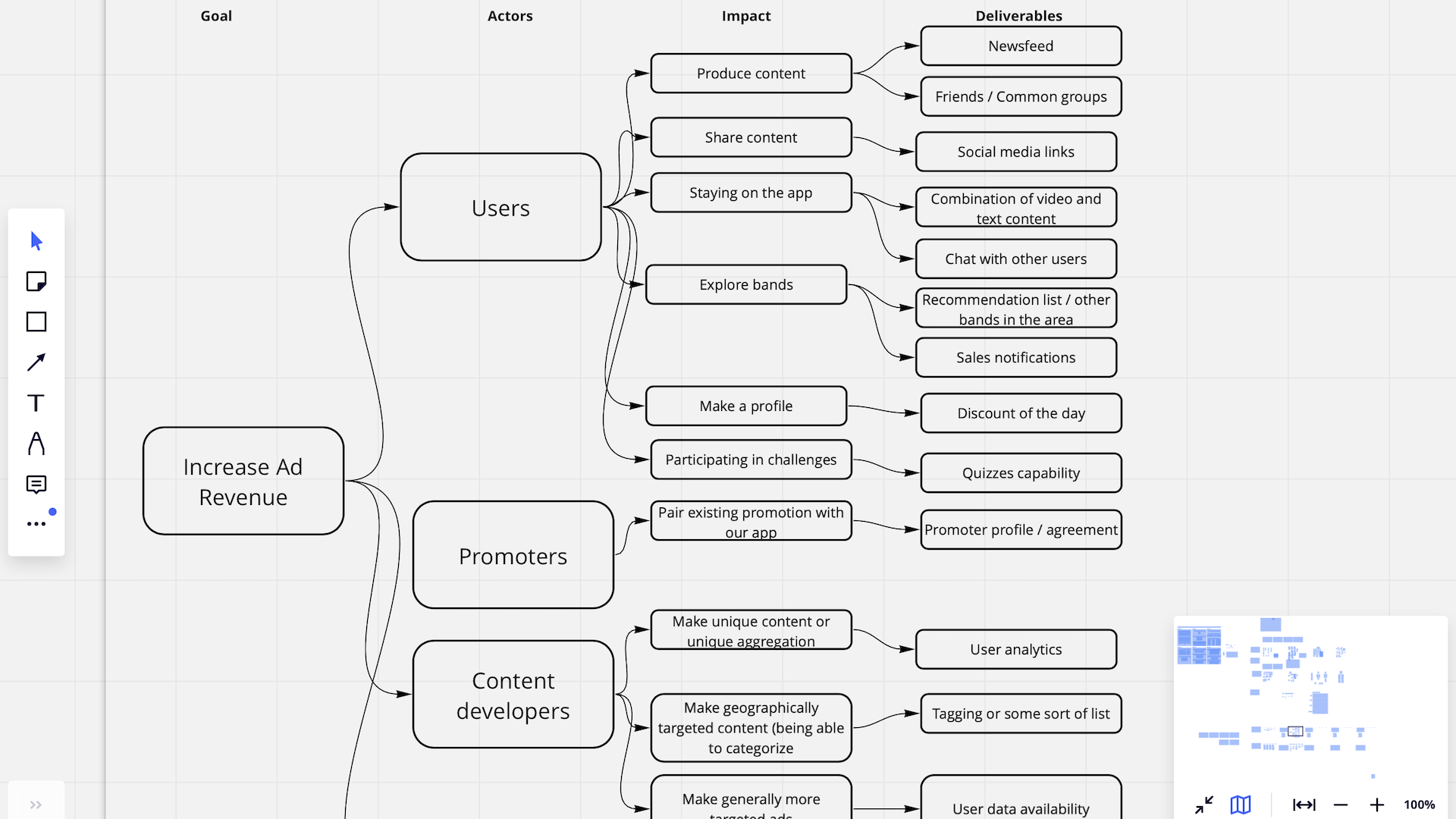 In the second workshop, the two groups took their roadmap and behaviour changes and used them to build an impact map to outline how each group will increase the online concert platform’s ad revenue. It was tempting for some participants to fall back to naming features they wanted to see in the app, such as optimizing mobile artist pages, but the framework really helped teams consider behaviour changes, such as increasing the number of artist pages that mobile users view by a certain percentage.

Then we asked them to once again plan four to five iterations based on their impact map to increase ad revenue.

Compared to the roadmaps participants did in the first workshop, the impact maps they built in the second workshop were specific, measurable, and made it easier for teams to prioritize what they should do in each planned release.

We ended the second workshop with an interesting conversation about how to know whether the assumptions we’re making are right when we’re building our impact maps. It’s important to remember that impact mapping isn’t a cure all, it’s just one way to get everyone on the same page. In some situations, impact mapping is the right tool, but there are others that help with prioritizing goals.

That’s the power of impact mapping. It provides an easy framework for making product decisions. At the same time, it doesn’t enforce which goals you should work on first. By default, it forces teams to focus on outcomes rather than features. It encourages you to look at your product in a different way.

The power and influence of fonts in design