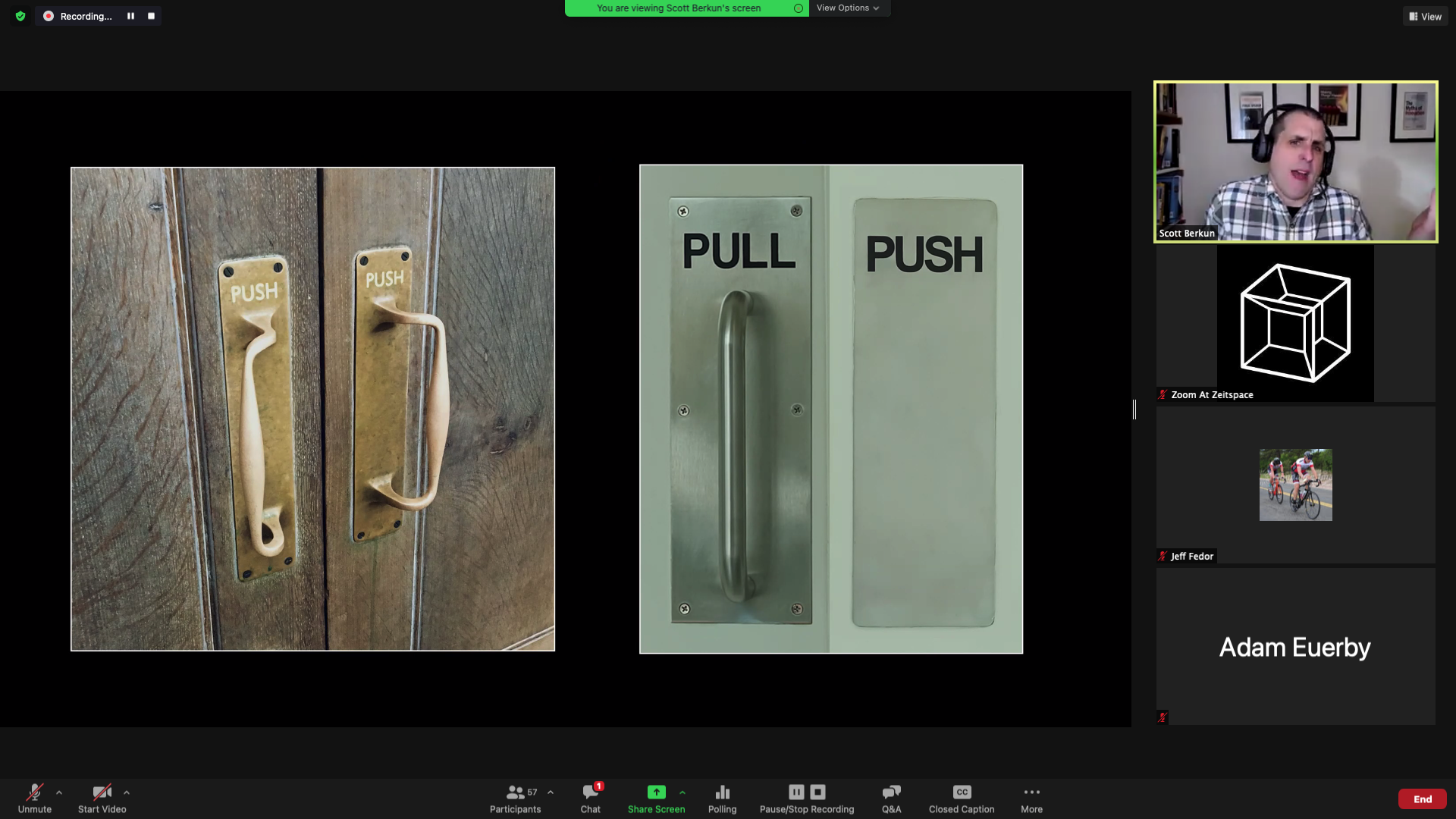 The power of storytelling in UX design

Have you ever heard a story that stuck with you long after you heard it? Maybe you read it in a book, or listened to it on a podcast, or read about it online or in a newspaper. Stories imprint themselves on our memories, help us feel empathy with others, and a connection to the world around us.

But if you’re a user experience designer, you can also leverage the power of storytelling to bring non-designers into your world and help them understand what you do and why so that the next time you explain why you’ve designed something a certain way, or why UX research is important, or how the insights you gain from usability testing are invaluable, they’ll better understand where you’re coming from.

“All people’s brains are wired around stories. We’re narrative creatures,” said Scott Berkun, who has written several books, including his latest How Design Makes the World. “Anytime you want to bring people in, the place to start is with stories. And we often fail when we try to bring people in to understanding what we do by talking about methods, talking about cognitive science, or talking about some kind of idealized view of how the world should be and it’s not anywhere near as effective.”

So when Berkun appeared virtually to talk about why we should understand good and bad design at a joint ProductTank Waterloo and uxWaterloo meetup, he, of course, told stories: About how the fire that destroyed the Notre Dame cathedral was really a user interface design failure. And how the now iconic N95 mask was designed by Sara Little Turnbull, who stumbled on the design while actually working on a new kind of fabric to make bras. During the design process, she recognized that the shape and pattern they came up with for that problem would actually be well-suited for a safety mask.

“It’s a great story and it’s far more involved than that and we should all know it. It’s a great story that we can tell non-designers and executives about how design affects us in our lives in ways that most people tend to take for granted,” said Berkun.

But the story Berkun spent the most time telling during his virtual talk was a cautionary tale about the town of Missoula in Montana.

Missoula is home to one of the worst intersections for traffic crashes in the U.S., known as “malfunction junction.” The six-street intersection was the result of a power struggle between the town dating back to the 1880s that led to most of Missoula being built on a grid pattern except for a stretch in the core that’s tilted 45 degrees, creating several confusing intersections, including malfunction junction. 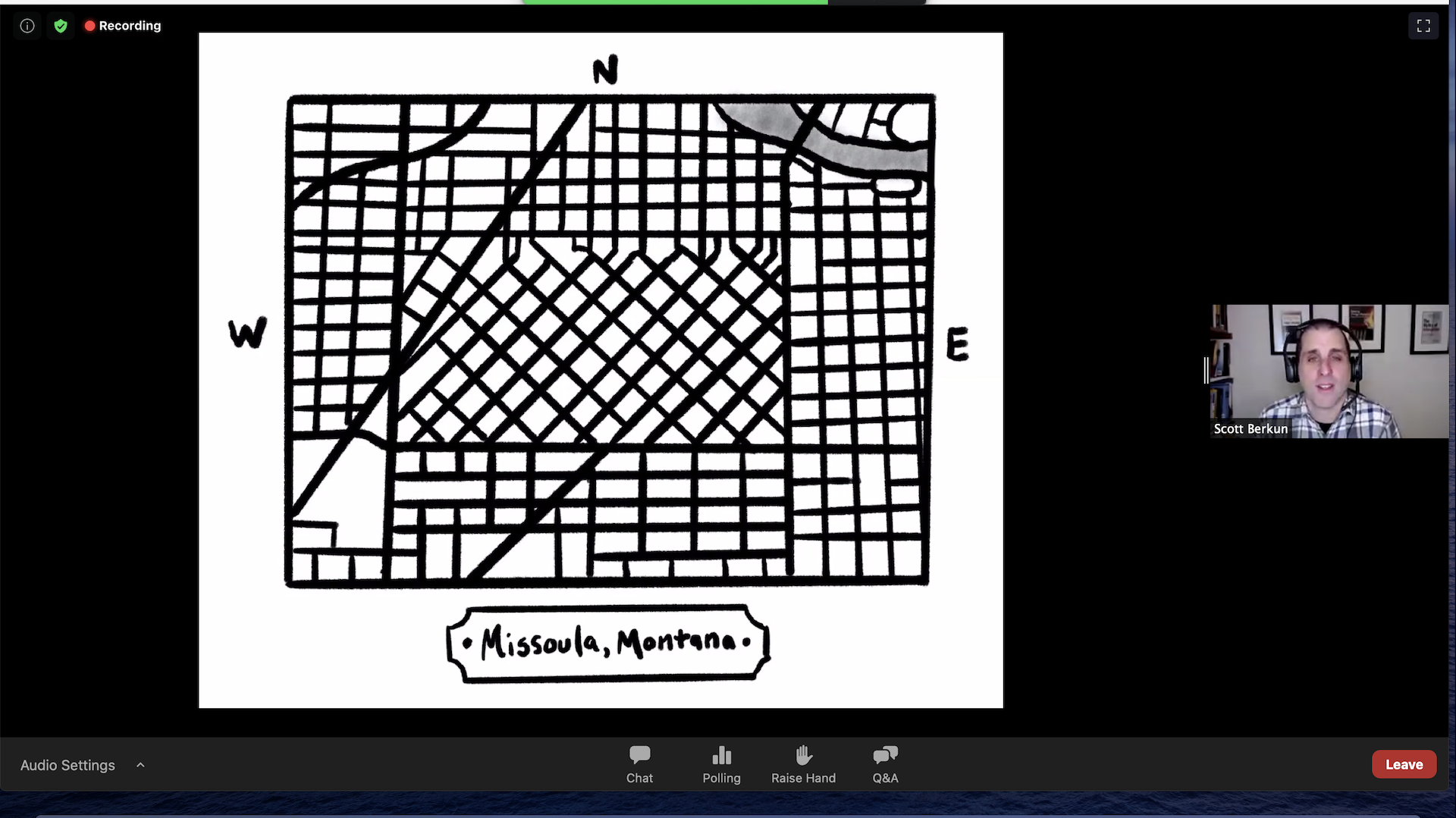 Missoula may not sound familiar at first, but Berkun filtered it through a software development lens. Let’s say you’re building a software product and head in one direction, but then, for the next version change your mind and head in a different direction. When you do that, anything that doesn’t get changed is technical debt, or design debt, said Berkun. Do you go back and change what you did at first to line up with the new direction?

In Missoula they didn’t, leading to the six-legged “malfunction junction” intersection. About 15 years ago, the town invested millions to get the intersection down from six intersections to five, but it’s still dangerous, said Berkun.

But design problems like those aren’t limited to small towns in the U.S., Berkun said. Sometimes designers will see problems in how apps are designed and think: How could they be so dumb? How could they not know the basic heuristics to follow?

“But we forget most of the world works the way Missoula does,” said Berkun. “The people who make the first design decisions, the most important ones, the strategic decisions, are usually not designers. It’s not until much later that the designer gets involved that has that knowledge and then they’re working backwards to try and figure out how to solve the problem, how to make it better.”

So when designers see a bad design, he said, they never think to ask the question: what were the real constraints that the people who made this thing faced?

“We do this drive by designing and we’re free of the reality of the hard part of the job,” said Berkun. “In our own work we always have reasons or excuses to try and justify why we can’t do the great work we want to do and we’re capable of, but when we look at each other’s work we forget all that.”

That partly happens because of how designers are trained and taught, he said. They aren’t taught to think about the power structure in organizations and how that affects their ability to do good design. And organizational structure isn’t the same as power structure in an organization, he pointed out. Often, the person who controls the budget has the real power, and that may not be a vice president.

“Once you recognize how the power structure works, then you can make sure you’re there early enough in the design process to help pave the way for how things work earlier on and from the beginning,” said Berkun.

Thinking about the challenges other designers faced

The story about Missoula is really a story about getting user experience designers to think about the challenges other designers may have faced when working on a project.

But it’s also a story about how to promote good design from the beginning. And the best way to do that, said Berkun, is to act as an ambassador for design, teaching people who have more influence about what you do and why it’s important so that they can carry your message forward.

“Then you say, ‘My job and my skill set help teams of people to make stuff that’s more like stuff that you love and less like stuff that you hate.’ There’s no person in the world, whether they’re a CEO or an engineer, who wants to make stuff that people hate. They care, they want to do good work. Now they have a personal investment. You got them to an emotional state about why making good stuff matters and now you’ve inserted yourself as the person who has the skill set to do it. Now you’re an ambassador and the way for you forward is far easier.”

The power and influence of fonts in design

The art of the sprint demo