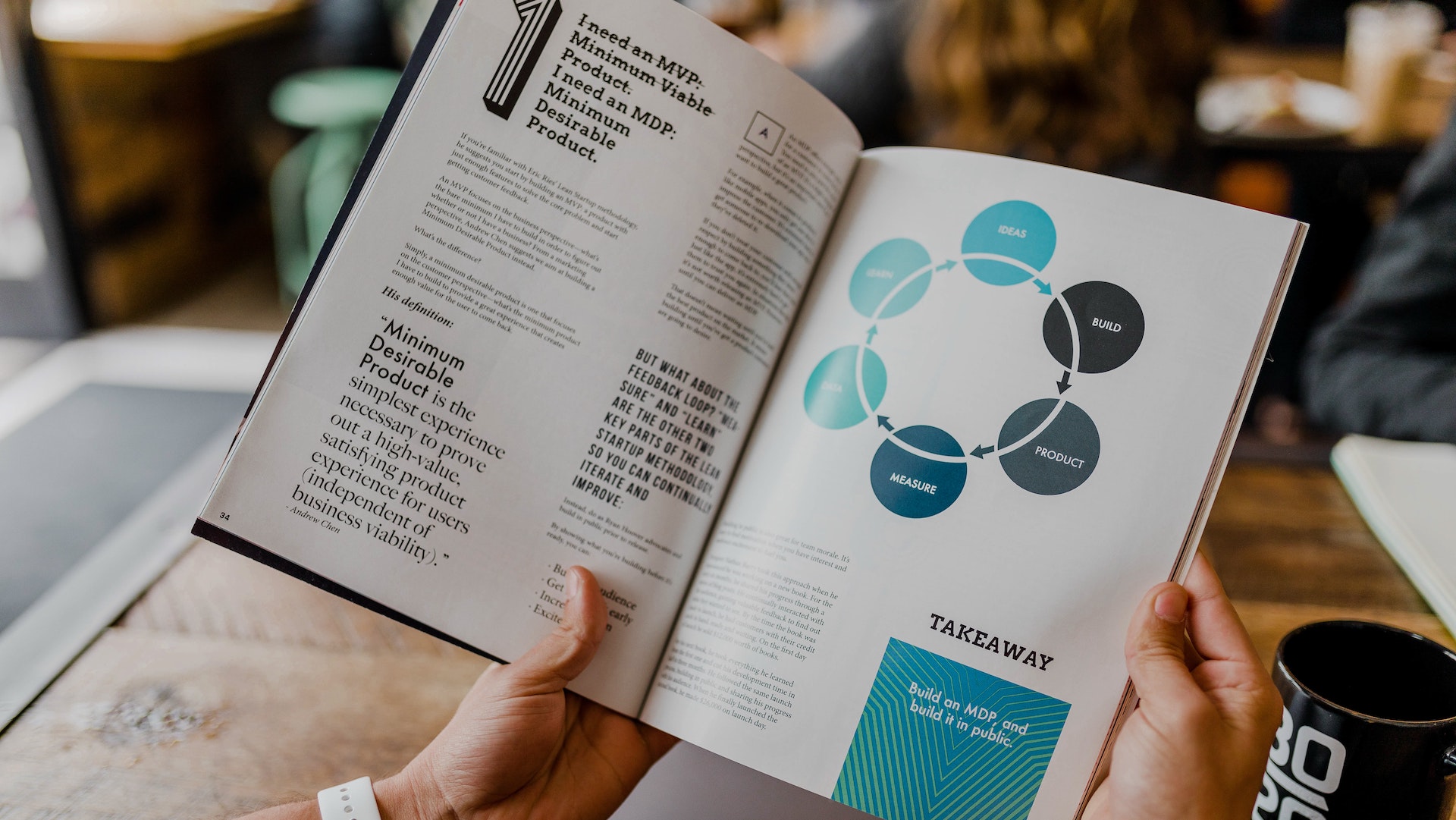 Confusion on a team can quickly kill a new product.

If you have a team that doesn’t talk about their differences in opinion, or people who feel unheard, or people who are working on a project but don’t know how it connects to your business values, then you’ve got a problem. No matter how great your project, it’ll never do as well as you want. That’s because you’re focusing too much on success metrics in the product development process and not enough on survival metrics.

According to Thomas, there are three pillars to survival metrics:

“It isn’t just enough to say you want to be fast or data informed. One of the flaws I see are these three things are often referenced but no one speaks to how to actually do them,” said Thomas, principal of Approaching One, a product consulting firm..

But product people live in a world of context.

How do you move fast realistically by understanding what the options are? Survival metrics, he said.

Survival metrics help a team decide if something is worth investing in, or whether they should pivot, or even stop pouring resources into a project. But being able to apply that thinking requires teams work in an environment where they have enough data to make decisions quickly and safely.

Thomas suggested teams use statements to decide if they should stop, pivot, or invest in a project. Having an invest statement signals to others on the team that this project is something they need to put more resources into. Double down on invest statements and get better outcomes, said Thomas. 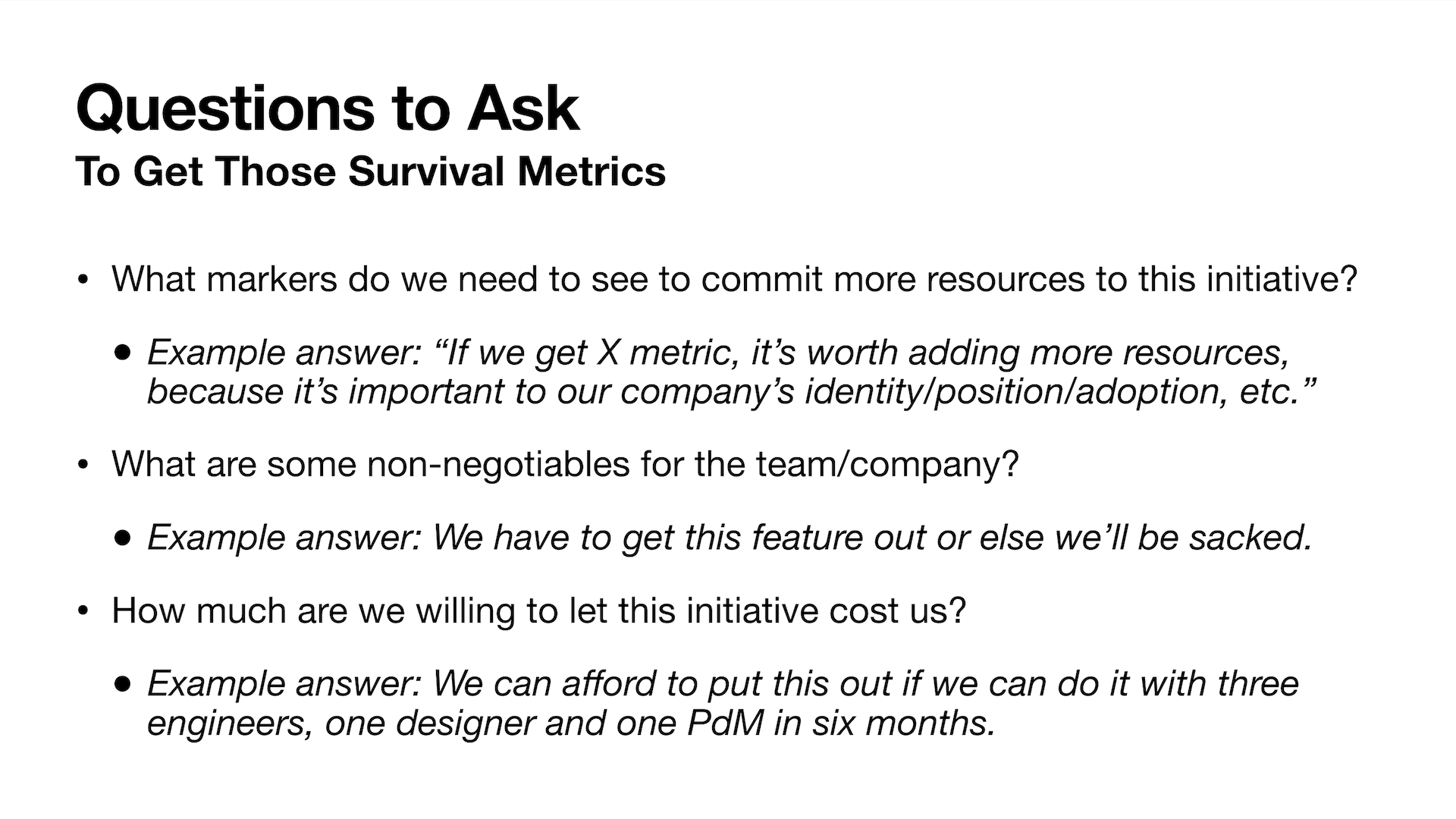 A list of questions to ask to get survival metrics

It’s important that at each step of the way, the team is connecting their project work to their company values. That’s not a new concept — we’ve written before about the importance of company values to project success, but what is new is how Thomas frames that. Most people talking about metrics frame a project around success metrics: Was this project successful? But Thomas takes that concept and flips it. Success metrics are great, but survival metrics are better. That’s because survival metrics intrinsically link the company’s value with it’s decision-making every step of the way.

“The values we have in organizations are the beginning of shared language that helps people feel safe in the decisions they are making,” said Thomas.

“Important that everything goes back to the values of your company and team. Is it something we care about? You need to pay attention and make sure it’s visible for people. It’s really easy to let your values slip when they’re not right in front of you.”

For Thomas, a company’s values don’t just dictate which projects a team should pursue, but which ones they should stop. Things that break values and culture in a company should be stopped, he said. So values should be visible each step of the way.

Survival metrics hinge on flexibility. Sometimes rather than chugging forward, companies need to shift, but don’t know what that shift should be. So they stay the course, spending money and wasting resources. But survival metrics set the stage for pivoting when teams need to by getting them to think about it before a project starts and then at regular intervals along the way.

Survival metrics constantly ask a team to consider resources and what's motivating them to continue working on a project using data to quickly make decisions about whether that project should continue, and whether the resources it's getting are worth it. It's not about asking the team once, but asking them at regular intervals how far they're willing to stretch on a project. Doing that helps teams foresee any issues and sidestep around them before they sink a project.

Part of Thomas' framework includes answering questions about the project to help teams define how far they're willing to go, when it's worth continuing, and signal when they need to change course.

Survival metrics fit into the feasibility stage of product validation (the other two being desirability and viability). 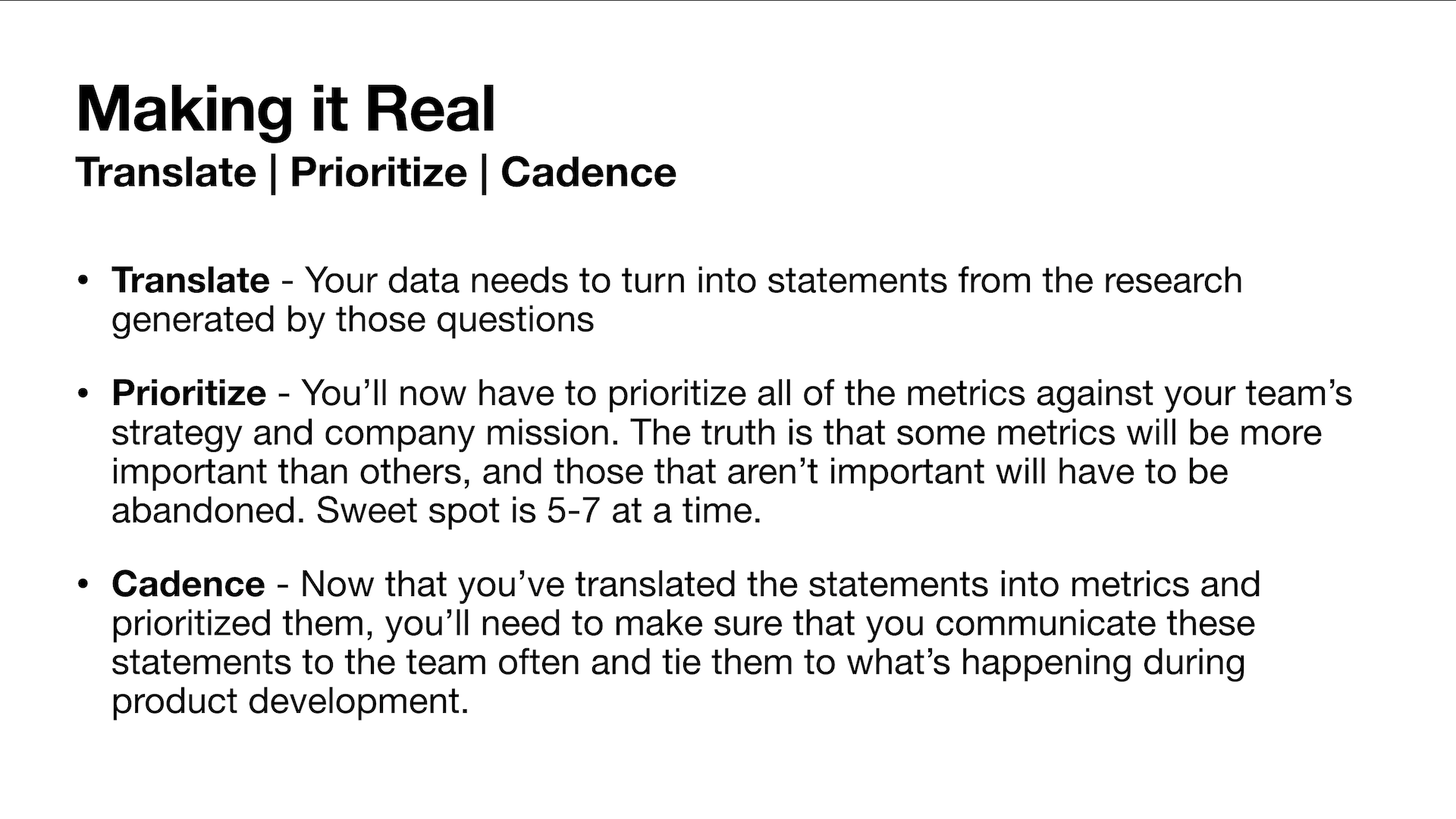 How to turn responses from the survival metrics questions into action

The answers to those questions will help teams set parameters for making decisions quickly in a safe environment for the team and with the right data to support whatever decision the team makes.

It sounds simple and yet surprisingly Thomas has seen companies struggle to adopt survival metrics.

He mentions one client he worked with that he calls “BobCo.” BobCo was a successful company that had high morale. In mid-December one year they decided to build a brand new feature for a chat app. The results were not good. While they were focusing on building the chat app feature and pushing out a successful product, the market caught up with their core technology and they lost their competitive edge. Having spent all their resources on the chat app feature, they didn’t have any left to put back into regaining their competitive advantage.

A few years later, they had mass layoffs and had to cut half the team.

So how did they end up there?

While BobCo had success metrics for the app — they knew where they wanted to go and how to get there — some of their team members felt unheard, and those differences were never addressed. There was also no team trust. The team didn’t know if they could make decisions, or how to apply the company’s values on day-to-day projects, said Thomas. All that led to mass layoffs at BobCo and a drop in morale.

The problem with BobCo was that their decisions were data-informed — they didn’t clearly understand the importance of a feature.

“If you know a feature is critical to a project, you start asking better questions around it around focus for the team. How much are we willing to let this cost us?” said Thomas.

Survival metrics could have helped BobCo change course quickly. BobCo was in a bad place but the good news turned it around, said Thomas. 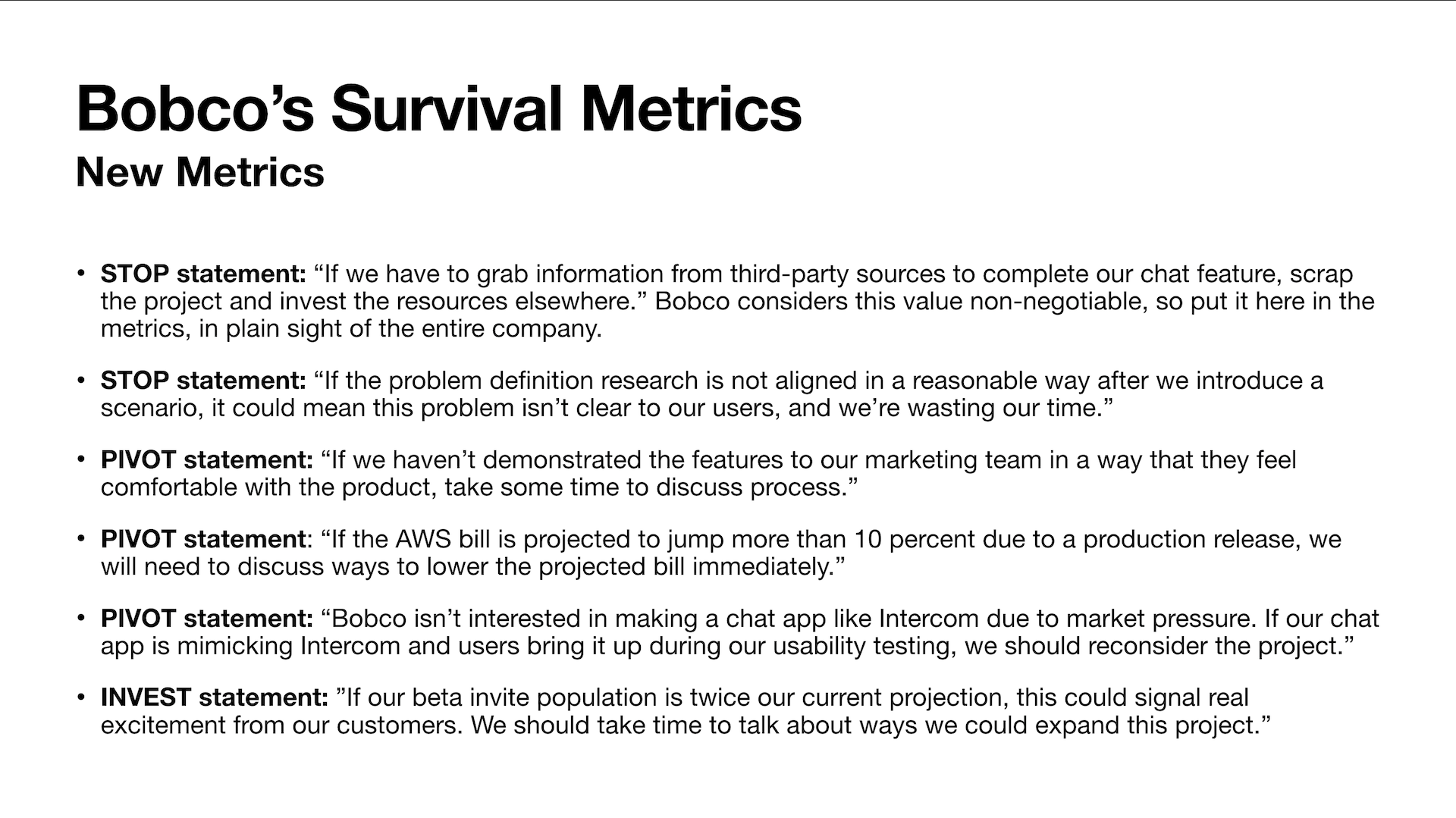 You’ll know you’re using survival metrics properly when you can answer these questions:

That, he said, is a good conversation for your leadership team to have.

Want to read more about past ProductTank Waterloo meetups? Check out all of our recaps on Zeitspace News or subscribe to get updates and never miss a story.

Reimagine, rebirth: How businesses are changing a year into the pandemic