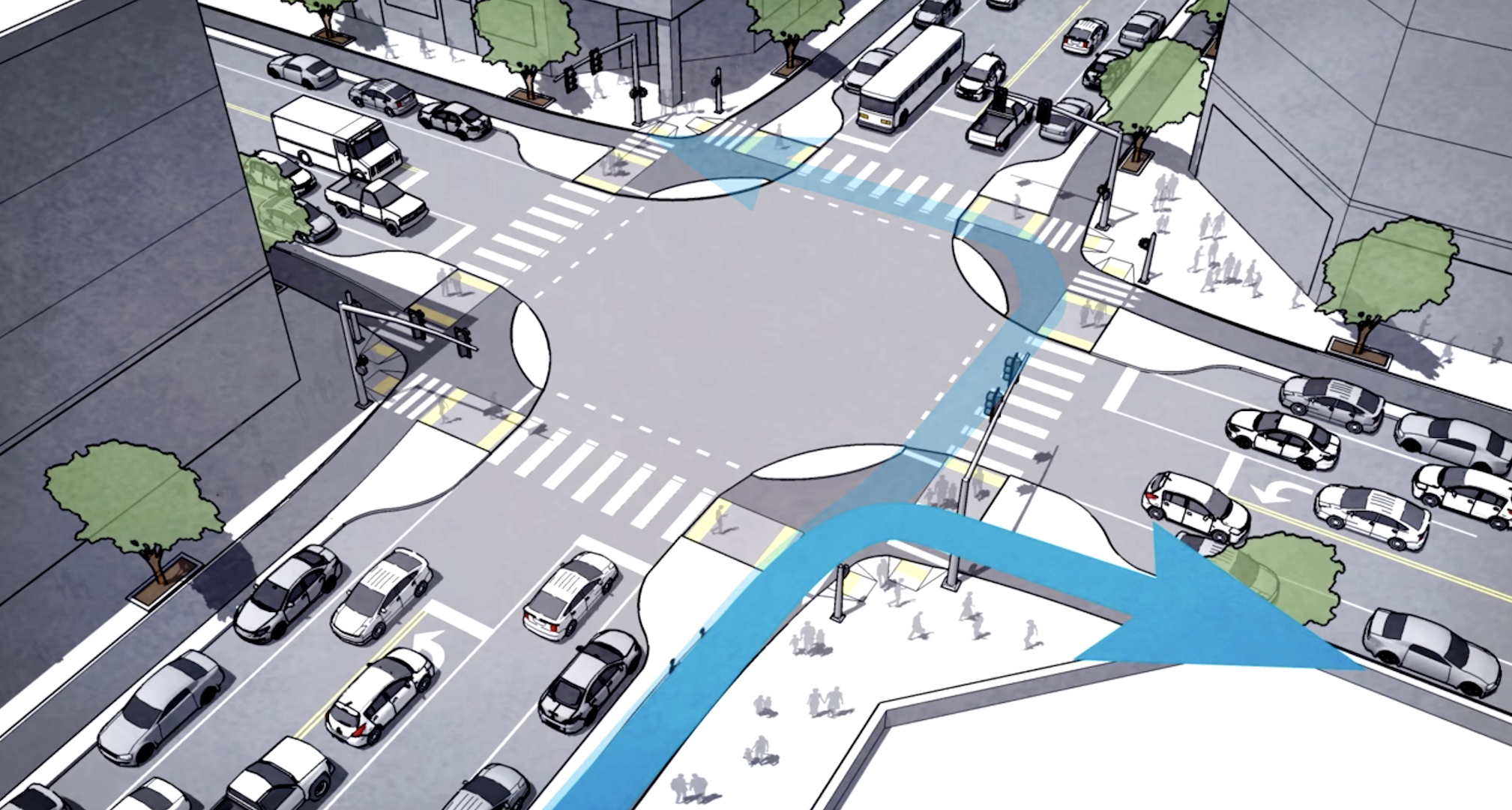 User research is the heart of user experience design.

Not only does it help UX designers understand the underlying problem before trying to solve it, it also ensures that designers will tackle the real problems that real people face.

That’s perhaps why parts of the City of Waterloo and Region of Waterloo’s plans for University Avenue are frustrating some people.

While the long-term plan includes separated bike lanes, a midblock crossing, and plans for placemaking, public art, and public gardens — all good things to be sure — in many ways the redesign still misses the mark when it comes to transportation for pedestrians and cyclists.

They still face four lanes of traffic and still mix too much with cars in intersections, which also aren’t designed with their utmost safety in mind.

Scott Weldon, a local safe streets advocate, says the University Avenue guidelines are a “flop” if the urban highway isn’t reduced to two lanes of traffic. Another local active transportation advocate, David Trueman, says all the placemaking in the world won’t address crucial safety issues on the busy stretch of road that is home to three post-secondary institutions and used by thousands of students every day.

And that’s why some people are frustrated.

At an open house on October 24 to show off the City of Waterloo’s long-term vision to guide the future of University Avenue, the region also presented its preliminary drawings for planned roadwork on the stretch between Weber Street North and Albert Street. The drawings, which the public will have a chance to comment on further in the new year, left something to be desired for those in attendance.

“I thought, ‘This just looks like more of the same. This doesn’t look new at all,’ ” says Trueman, a retired technology executive.

The City of Waterloo did their job: They engaged in primary user research by talking to the public about the problems on University Avenue and then followed up that research by highlighting existing solutions they could use to address those problems. Then, they used their research to set out clear recommendations that are akin to design principles for University Avenue: Make the street safer for pedestrians and cyclists. Don’t prioritize the car. Slow down traffic. Those recommendations appeared in bold on the panels the city showcased during the open house and online.

If those recommendations are so important, should University Avenue still have four lanes of traffic? Those who walk or cycle the road say no.

“To give space to people you have to take it away from cars,” says Weldon.

“It’s like saying we’re going to pave a highway and put a park beside it and say it’s for people,” says Weldon. “You can’t design anything that feels like it’s for humans with four lanes of traffic.”

And so the issue becomes a disconnect between intent and execution.

While the design boards that offer guidelines, not detailed plans, focus on prioritizing pedestrians, cyclists, and transit, there’s still a sharp focus on moving cars.

There’s some progress in the plans, notes Trueman. The design includes separated bike lanes — a feature cyclists would have had to fight for in the past. But Trueman still has concerns that intersections aren’t designed in a way that makes them safer for pedestrians and cyclists. If the city and region are going to invest effort, that’s where they should focus, he says, since that’s where collisions happen. (Weber Street and University Avenue was Waterloo’s worst intersection for collisions in 2017.)

There are no shortages of places to find best practices when it comes to street design. The National Association of City Transportation Officials and Smart Growth America both have online resources for designing arterial roads, intersections, and streets in general. They have elements to include and pitfalls to avoid. There are also experts close to home. The University of Waterloo recently published research some of its alumni had done around smart street design. 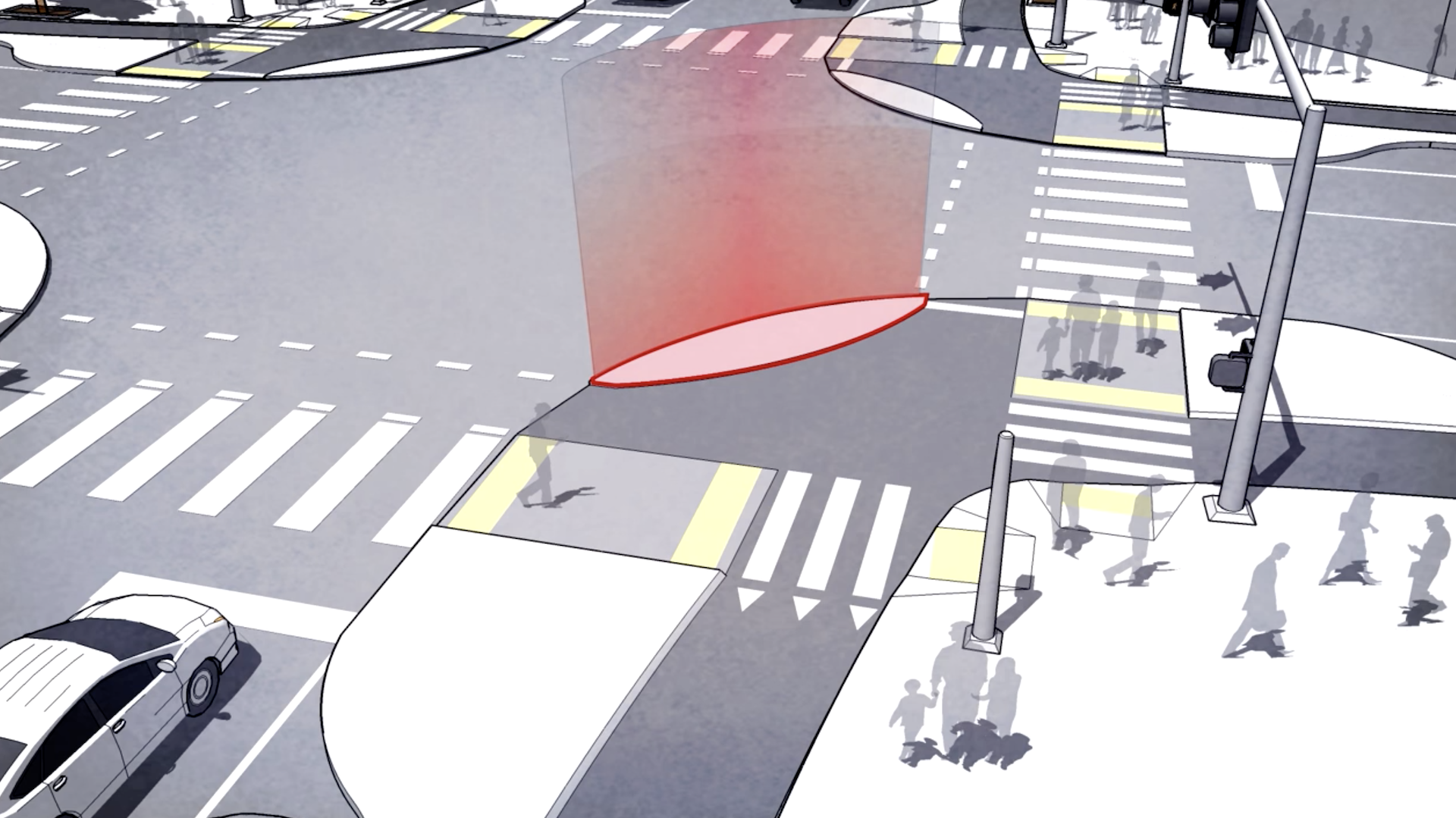 Concrete traffic islands are a key part of protected intersections since cars have to make wide right turns, putting crossing cyclists and pedestrians in a driver’s line of sight. (Images courtesy of Nick Falbo, Protected Intersections for Bicyclists)

The issue, though, isn’t ignorance around best practices, it’s political will, says Brian Doucet, Canada Research Chair in urban change and social inclusion at the University of Waterloo’s School of Planning.

“We know what to do, that’s not the issue. The challenge is politically how to implement it,” says Doucet. “There’s a reluctance to do things that challenge the primacy of the car.”

That means, bike lanes often disappear at intersections because cars need to turn, he says.

In order for transformative change to happen, bike lanes should continue through intersections and buses should have dedicated lanes so they aren’t stuck in traffic, adds Doucet.

Those changes may sound extreme to some, but larger cities have tackled busy thoroughfares with success.

In Toronto, a pilot to restrict private vehicle traffic on a 2.6-kilometre stretch of King Street became permanent in April. Now transit has priority on the street and private vehicles can’t drive through major intersections. During the pilot, which began in November 2017, travel times for transit users were cut and transit ridership increased by 16 percent.

The King Street pilot in Toronto prompted New York City to limit traffic on a section of 14th Street from 6 a.m. to 10 p.m. daily. That pilot, which began in October to allow buses to travel largely unimpeded during peak times, limits traffic to buses, trucks, emergency vehicles and cyclists during key commuting times.

Safety should lead the way

No matter how University Avenue is changed, safety should lead the way, says Trueman.

“That trumps everything and it has to truly trump it, not just pay lip service. We want it to feel safe and be safe,” he says. “No amount of placemaking is going to make it safer.”

Waterloo city councillors will vote on the University Avenue guidelines early next year.

The City of Waterloo is trying — the vision boards make that clear.

But everyone needs to be on board to carry the vision through, otherwise the University Avenue Gateway will be a missed opportunity we might never get back.

Why cycling advocates are frustrated with plans for Westmount Road