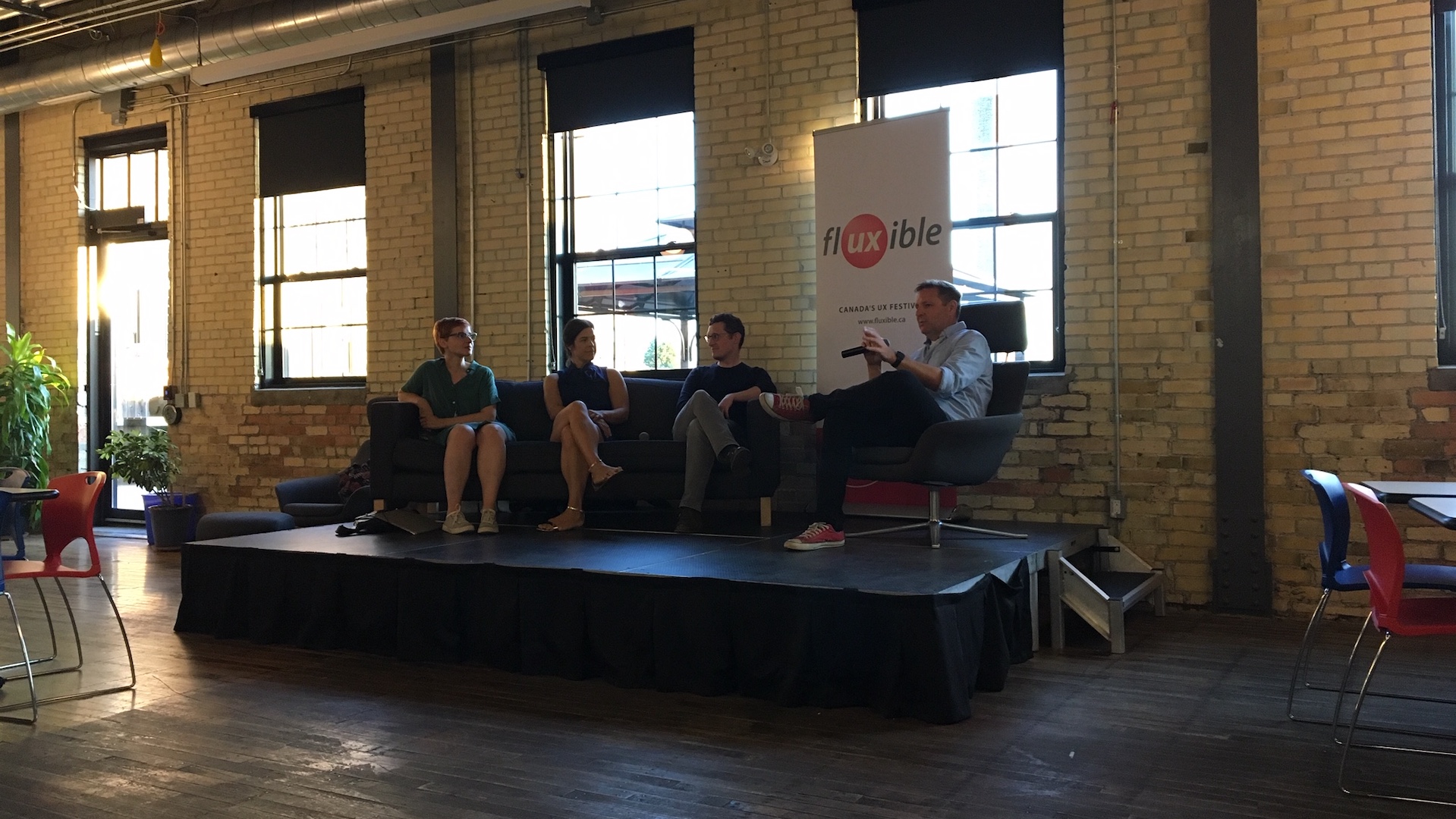 You don’t have to be a manager to lead.

The panel covered a range of topics related to a career in user experience design, from offering various definitions of what is UX to how to build a career in the industry when just starting out. But the one topic that drew the most discussion was how to set yourself up to become a manager in the field, if that’s your goal.

“Management is confused with leadership,” said Davis Neable, director of UX design at Manulife, and one of three experts on the panel. “You have an opportunity to lead even without the manager title. How do you prepare yourself to be a manager? First, think of yourself as a leader.”

The panel was a way to offer insights for those interested in or already involved with the UX field about how to grow a career in UX.

“This particular profession, though young, is evolving really, really quickly and that is reflected in the backgrounds of the people in it,” Fedor said after the discussion.

There isn’t just one path to a career in UX, he said.

Kraemer, for example, has a degree in English Literature. He wanted to write novels but joked that he also wanted to be able to afford groceries so he signed up for an online writing and information design program at a Toronto college. That led to a co-op at the Ontario Science Centre, and then a career in content strategy. Later, he heard the term “UX” and thought he’d like to do that.

“I found myself doing things that kept turning into fields,” he said.

Neable and de Jong had similar stories about their careers in UX. Neable thought she’d become a physiotherapist but knew the field wasn’t for her after her first co-op. De Jong did a high school aptitude test and received 100 percent in both art and science.

“I was told I had to choose one and that there was nothing I could do,” she said.

She decided to pursue industrial design in school. During a co-op, de Jong worked at a company that had a colour material designer on staff. She returned to school and decided that was the path she wanted to follow.

So de Jong pursued a minor in psychology, which led to a foray into flight research testing. In 2008, she landed at BlackBerry, where her job was to come up with the new cool phone colour. Eventually, she decided to pursue a graduate degree. Once complete, she thought, ‘Now what?’

“But then the phone started ringing,” said de Jong, of how she got her start as a consultant.

She encouraged those just starting out to be open to change — both within the field and themselves.

Fedor echoed de Jong’s sentiment after the panel. Stories such as de Jong’s are not unique to most UXers, he said.

“Know that it’s a long game that doesn’t have a linear path,” Fedor said.

As a discipline, UX design has matured in the last 20 years.

Neable said UX used to be relegated to the end of the process, but is now at the beginning. She expects it to continue evolving from a creative discipline to one that’s rooted in science, much like engineering.

But no matter the strand of discipline, at its core, UX goes beyond designing digital products, the panelists agreed.

“It’s about framing a problem, solving that problem and communicating a solution,” said Kraemer.

Asked how someone would enter the UX field without a strong portfolio, Kraemer said the ability to think critically and communicate is key. Try to get a better sense of who you are and what you’re passionate about and bring that to the field, he encouraged the audience.

“The world is full of problems. Pick one and try to solve it.”