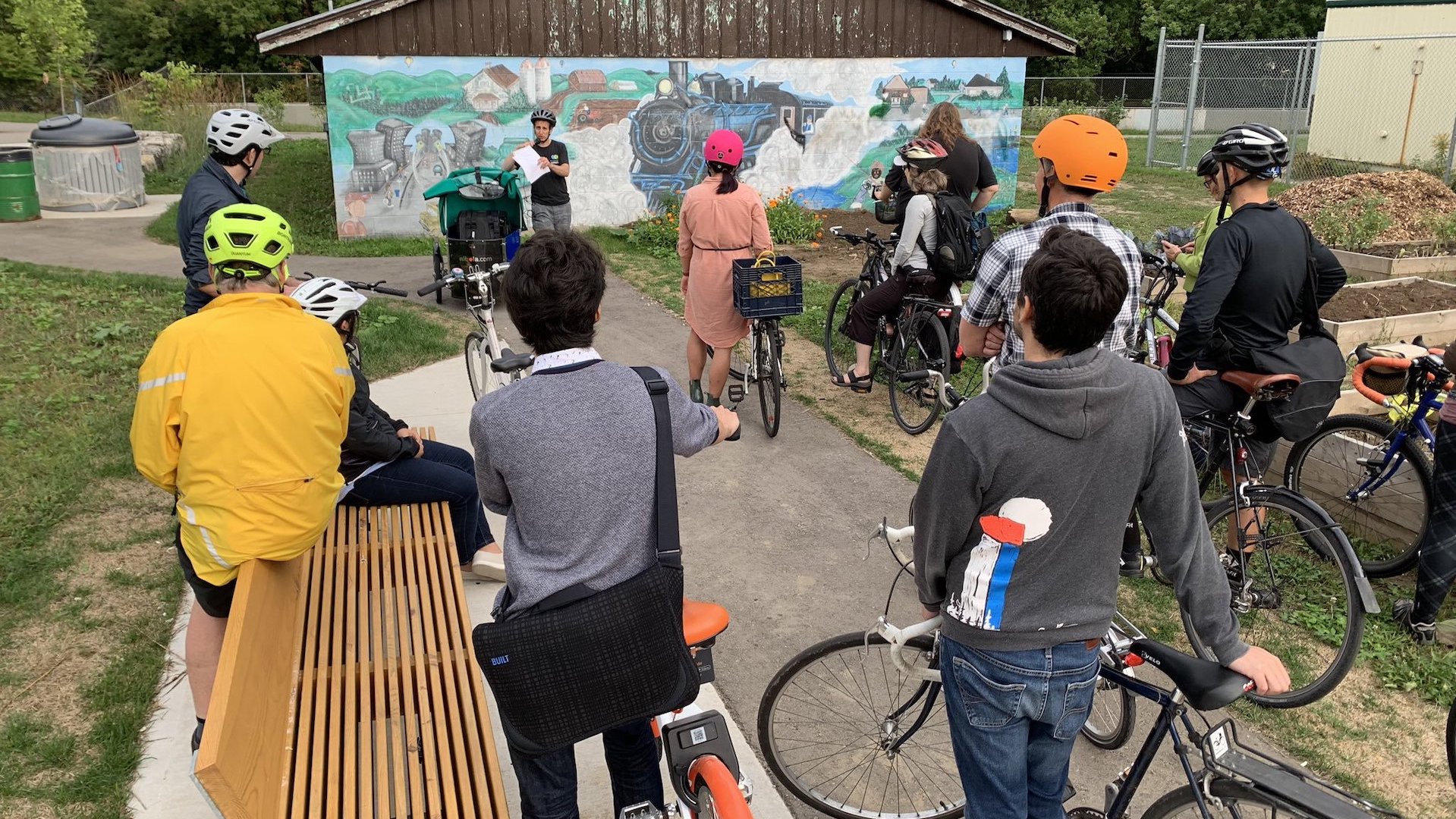 I’m cycling in a bicycle lane on a busy Kitchener street as cars whiz by, some giving me a wide berth, others not. Up ahead, there’s an orange construction sign in the middle of the bicycle lane detouring drivers to another road. My heart is racing. Should I jump on the sidewalk or ride my bike around the construction sign? I decide to cycle around the construction sign. Soon, that paint on the road turns into a protected bicycle lane. My heart rate slows now that there’s a flexible bollard between my bike and the cars on the road. I’m not an expert cyclist and the protected bike lanes give me the confidence I need to navigate this busy stretch of road.

The City of Kitchener has spent $430,000 designing and installing protected bike lanes to five kilometres of busy streets such as Queen’s Boulevard, Belmont Avenue, and Water Street. The protected lanes are part of a plan to build what the city calls complete streets — streets that are built first for pedestrians, followed by cyclists, public transit, and drivers. Complete streets are meant to get Kitchener residents to think about using other modes of transportation besides driving for small trips to help unclog some roads. It’s not that the city expects everyone to stop driving, says Darren Kropf, the City of Kitchener’s active transportation planning project manager. But if just 10 percent of trips in Kitchener are shifted to active modes of transportation — walking or cycling for smaller trips that are less than five-kilometres, for example — then that helps reduce wear and tear on city streets, eventually saving the city (and taxpayers) money. That is not far out of reach. According to Statistics Canada’s latest numbers from 2016, 5.5 percent of commuters in Waterloo Region walked or cycled to work.

“It’s about making sure the right trips are done by the right transportation,” says Kropf.

Kropf is talking about complete streets and bicycle infrastructure during a guided bike tour that’s part of Fluxible, Canada’s UX Festival. His Fluxible Meetup brought out about 20 people, many of whom, like me, don’t identify as cyclists. But that doesn’t matter, Kropf assures the group. “We’re all just people on bikes,” he says.

The 12-kilometre route on the guided bike tour was chosen to showcase some of the best cycling design features that the city has installed, as well as some areas where cycling can be a challenge.

The City of Kitchener is investing a lot of money into active transportation, says Kropf. Part of that funding went toward the Iron Horse Trail, a more than five-kilometre multi-use trail that spans from Erb Street West in Waterloo to Ottawa Street in Kitchener. The trail is considered a commuter trail, says Kropf. About 250,000 people use the trail every year — 1,500 alone on really nice days. In the winter, the trail is still used by 300 people a day. The trail is so important to the overall active transportation network that it’s a top priority for winter clearing (it has the same priority as a major road, such as Victoria Street).

While parts of the trail have recently been widened and a yellow stripe was painted down the middle to create lanes, it still has its issues. Pedestrians and cyclists using the trail have to cross busy Victoria Street (a cyclist was critically injured at that spot on September 9). Later this month, the entire stretch of the Iron Horse Trail is closing for the fall because the city is building a refuge island at the crossing, but in a perfect world would actually build a raised crossing (essentially a really wide speed bump) to force drivers to slow down and give pedestrians and cyclists the right of way. (The trail is closed starting Sept. 23 for various upgrades.)

But the message in Kitchener is clear: There’s a move away from car-centred design and a move toward more pedestrian and cycling-friendly design. Those intentional design choices include narrowing roads, which naturally forces vehicles to slow down, and closing Gaukel Street to cars, a move that’s been resident-led.

More than that, building complete streets means the City of Kitchener wants to better connect and build multi-use trails as well as separated bike lanes so cyclists stay off the sidewalks on busy roads. After the City of Calgary built separated bike lanes, it saw the number of bicycles on sidewalks drop from an average of 16 percent to 2 percent. Separated bike lanes are also safer for everyone, including drivers. A memo published by New York City’s Office of the Mayor noted that when protected bike lanes are installed “injury crashes for all road users (drivers, pedestrians, cyclists) typically drop by 40 percent and by more than 50 percent in some locations.”

Another part of the City of Kitchener’s plan is to build bike lanes in some boulevards so they don’t conflict with pedestrians on sidewalks and build streets that make bicycles a priority. It’s all part of a push to make streets safe, comfortable, and convenient for people of all ages and abilities.

Because streets shouldn’t be made just for drivers. They should be made for everyone.