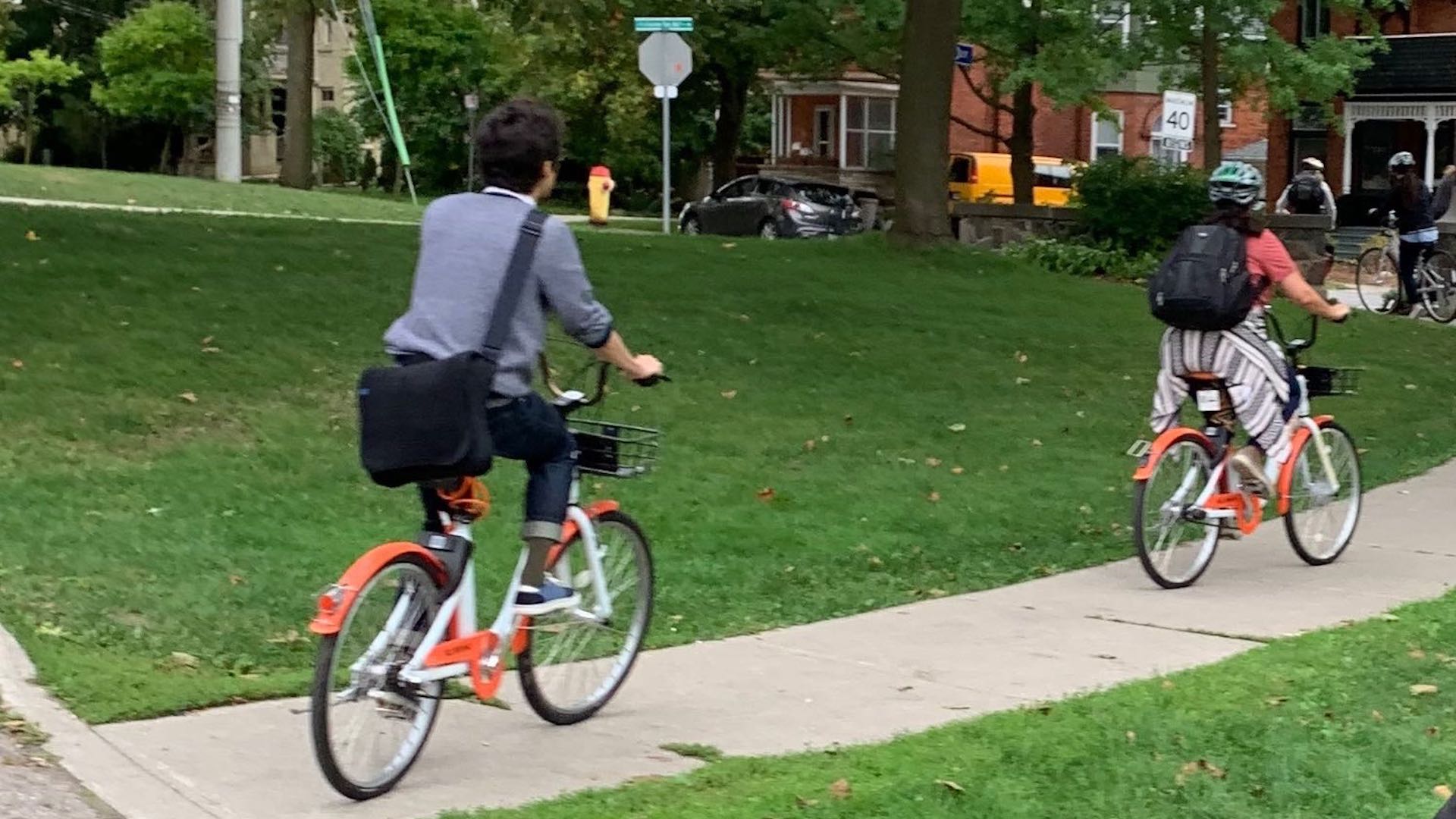 I’m not an avid cyclist. At home, I use an old blue bicycle that my spouse bought 25 years ago. I cycle mostly to nearby baseball diamonds when my son has a game, or for family bike rides for ice cream in the summer, but that old blue bike doesn’t fit me properly and it hurts my knees. So when Zeitspace partners Mark Connolly and Jeff Fedor suggested I check out Fluxible’s first-ever guided bike tour, I knew that old blue bicycle wouldn’t work well. (More on that Fluxible Meetup to come separately.)

Sarah-Beth Bianchi, who is on CycleWR’s Steering Committee, suggested I give Drop Mobility’s rental bikes a try. So I did with mixed results.

First, let’s back up a bit.

What is it? Drop Mobility is a bicycle-sharing pilot program in Kitchener, Waterloo, and Cambridge. It launched May 13 with a fleet of more than 100 orange and white bicycles (called Dropbikes). The pilot runs until the end of fall 2019 and is a joint venture between the Region of Waterloo and the three cities. The bike-sharing program is in about a dozen Canadian cities, including Toronto, Kingston, and Vancouver.

How does it work? Users can download Drop Mobility’s app from the App Store. The smartphone app allows you to find, unlock, pay, and return a bike with your phone. Using GPS, the app will show users a map with orange points indicating where Dropbikes are located. When you find one of the bikes (they’re typically locked to a public bike rack), you unlock it by scanning a QR code on the bike.

I had a bit of an issue unlocking the bikes. I found a few Dropbikes locked to a bike rack and had to scan three of them before one finally unlocked. When I scanned the first two, I received a message saying that I couldn’t unlock the bike because it was being used, when it was clearly locked to a bike rack. That may be because those users didn’t end their trips properly (more on that later). I was able to unlock the third one by manually punching in the bike’s ID number.

Once unlocked, you can take the bike anywhere (including on Ion), but the bikes must be returned to a designated drop-off spot, which you can find on the smartphone app. Your trip doesn’t end until you take a photo of the Dropbike to show that it’s been locked properly and isn’t blocking public property. This is an issue: If you’re not able to submit a photo of the locked bike, your ride won’t end and the app will think the Dropbike is being used when it’s not. The bikes come with a cable so they can be locked to a bike rack in Drop Mobility’s service area. I found ending my trip pretty straightforward. The app provides you with a step-by-step guide on how to end your trip, but one user on the guided bike tour had issues ending their ride.

How much does it cost? Bike rentals cost $1/hour, plus a $50 deposit for pay-as-you-go customers. If you sign up for a membership, you can pay either $20 for 30 days, $50 for 90 days, or $100 for a year and get four rides a day, each up to an hour long. You can also “top up” your account by adding either $10 or $20. The deposit is waived for memberships and “top up” accounts. You also earn free ride credits if you add a credit card to the app or if you buy a membership.

Overall, Drop Mobility has a few kinks to work out with its app. But the biggest issue is that the Dropbikes are hard to ride on roads with any grade. I’m a novice cyclist, but that shouldn’t matter. And others in our group riding a Dropbike agreed they were a challenge to ride. One described the experience as “riding on sand.” Another said the bikes “weren’t really built for cycling.” If I didn’t have a bike, I would consider using Drop Mobility’s fleet again, but perhaps only for short trips on flat land.

Find out more at dropmobility.com.

The Fluxible Schedule web app is back for 2019