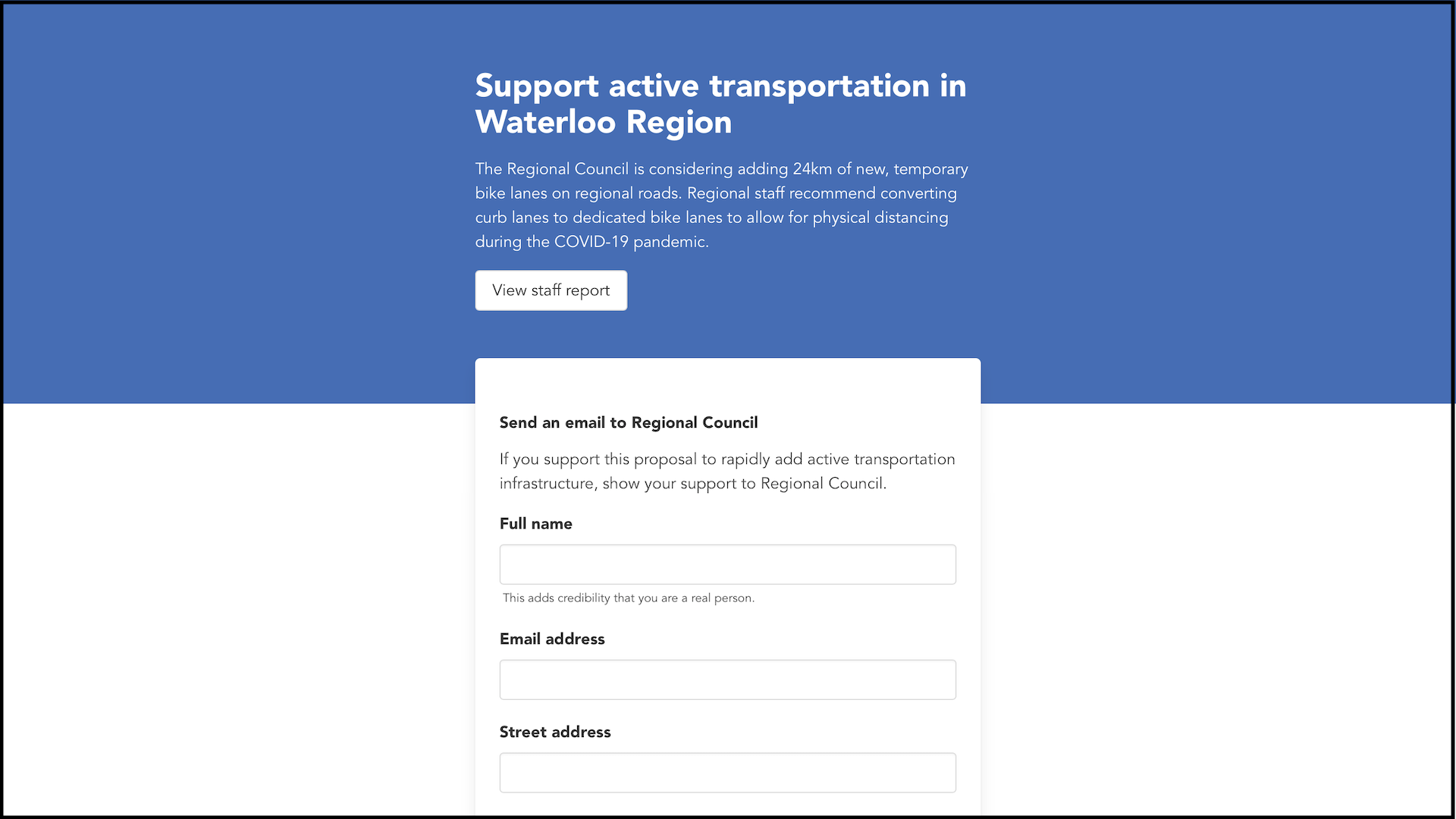 How to support active transportation in Waterloo Region

One of our missions at Zeitspace is to use our skills as UX designers and developers to advocate on issues that matter to us.

But two other issues that are important to us are active transportation and inclusive design.

After I covered the regional council meeting this week, where councillors debated whether to add new, temporary bike lanes along key stretches of some regional roads, it became clear to Zeitspace partners Jeff Fedor and Mark Connolly that there was a need to help Waterloo Region residents connect with their regional councillors on issues that matter to them.

Civic engagement can sometimes be a tricky thing. Councillors want to hear support and concerns from residents about proposals, but human nature compels us to speak out when we’re bothered by something, not necessarily when we support it.

We wanted to leverage tech to help people engage their regional councillors about the new, temporary bike lanes in a fast and easy way. So we created an app to support active transportation. The app makes it easy for residents who support these temporary dedicated bike lanes to let regional council know because that’s also an important part of public consultation, says Fedor.

“This app takes the guesswork out of connecting with regional council,” he says. “It makes it simple for people to engage.”

Here’s how the app works:

When you first navigate to the app, you can read the staff report about adding 24 kilometres of temporary, dedicated bike lanes. Then you can fill out your name, address, city or township because it’s important that councillors know they’re hearing from constituents. The app then constructs a draft email for you, to which you can add your own personal comments about why the active transport proposal matters to you. The email lets councillors know this proposal is important and that you hope they’ll support it on June 24.

Many of us at Zeitspace are active transportation users, but more importantly, this proposal is really about giving pedestrians and cyclists room to safely get around while limiting the spread of COVID-19. And with road traffic down and trail usage way up, adding temporary dedicated bike lanes on some roads is a sound and responsible move.

Adding to the spike in the number of people using the trails in the region is that there’s increased demand for cycling, with local bike shops reporting that they’re sold out of entry level bikes and their service departments are as busy as ever.

None of this should surprise anyone.

Since 2007, the number of young people driving has dropped. According to statistics from the National Household Travel Survey in the U.S., young people prefer to use public transit, walk, bike, or use a rideshare. While generations before may have seen the vehicle as a conduit to freedom, the opposite is true with Millennials and Gen Z. They are concerned about the cost and maintenance of owning a car, but also about the environmental impact.

We are, after all, still dealing with a climate crisis in the midst of a pandemic. It requires the kind of thinking the region has become known for: innovation.

“We pride ourselves on our innovation economy,” says Fedor. “Now we need to think about our roads in an innovative way too.”

How to design a design team