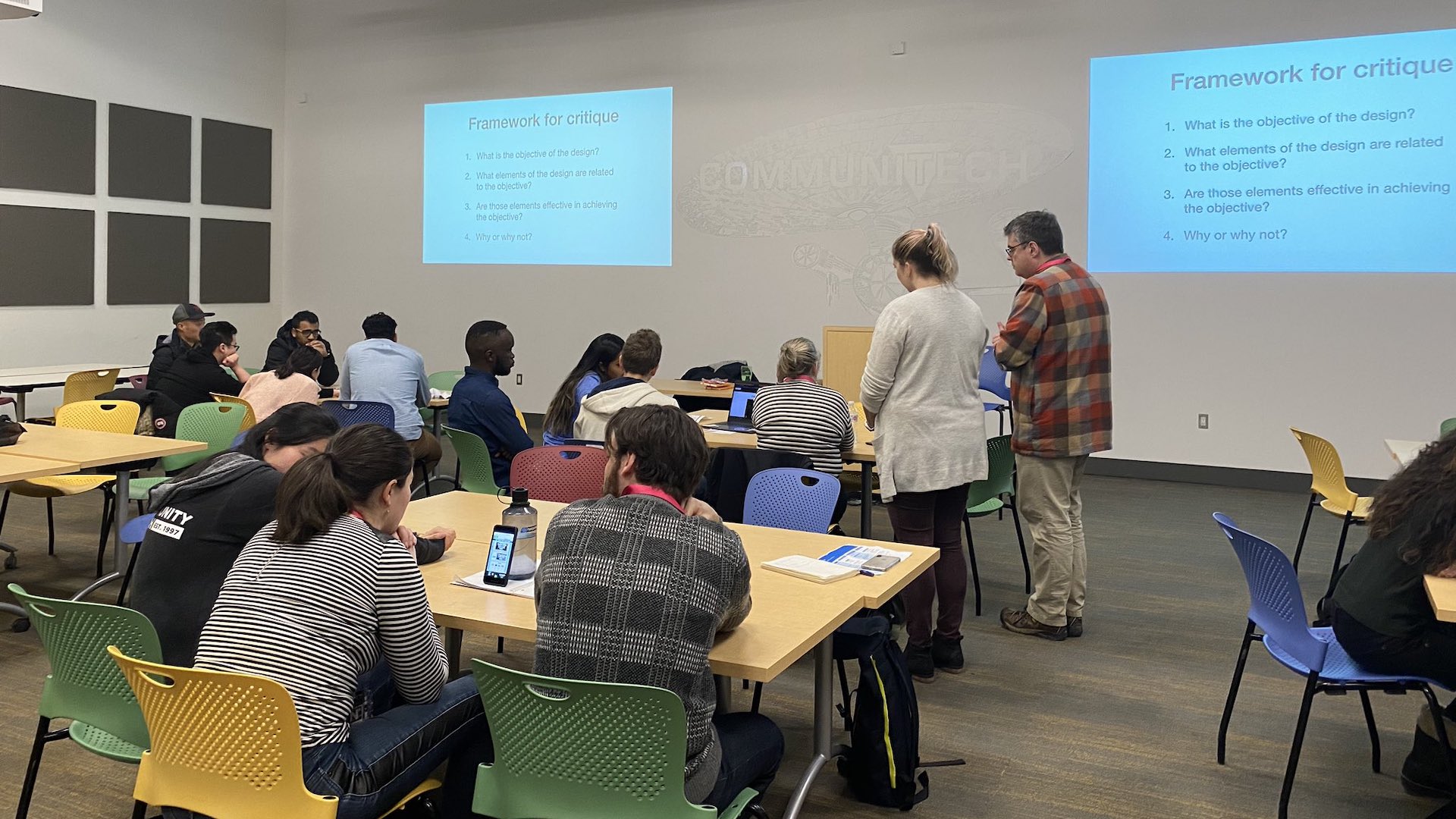 How to do design critique: a tool for designers to improve their work

One of the most powerful habits you can develop as a user experience designer is to meet with other designers and talk about your work. But there’s a way to turn that talking into something more focused that will help improve your design. And that is design critique.

Critique is an established part of our design practice at Zeitspace and happens formally twice a week. But it can — and sometimes does — happen any time. (We’ve also started critique sessions for software developers at Zeitspace. More on that in a separate post.)

Critique improves project work and that’s why we do it, says Zeitspace partner Mark Connolly.

“More importantly, it helps us get better as designers because we’re thinking critically about our work,” he says.

Critique evaluates a design in an analytical way using a structured framework. We use the framework in Discussing Design: Improving Communication and Collaboration through Critique, co-authored by Adam Connor and Aaron Irizarry. If you’re not familiar with critique, this framework — built around four key questions — is the best place to start. It lays out the structure that any critique should take:

Critique is about focusing on what matters most, rather than getting everyone to agree. It’s about respecting the designer’s autonomy to design in a way that meets the goals of the project, says Megan Pollock, a user experience designer at Zeitspace. How to get there is up to the designer, not by group consensus.

“It reminds you to understand why someone has done something a certain way fully before you identify any issues rather than making a snap judgment on stuff and saying, ‘I don’t like that’,” says Pollock. “It may not be the way you do it, but that’s not to say that their solution isn’t right or better. It reminds you to give the benefit of the doubt to other people and takes away egos because you’re doing it objectively.”

The magic of critique comes from asking why. For example, rather than make a statement that the colours used in a design should be blue instead of purple and moving on, during critique it’s about understanding why the designer made that choice and then pointing out things to consider, such as accessibility and contrast. That may help the designer think about the colours they’re using.

Pollock says critique often gives her a list of things she hadn’t yet considered, or questions she didn’t think to ask. But the biggest benefit, says Pollock, is getting other eyes on her designs twice a week and the objective feedback that comes with it.

It’s harder to argue with an objective critique rather than a subjective statement, she says.

“It’s easier to say, ‘I’ll take that into consideration,’ because you will,” says Pollock. “It’s something to consider and think about rather than something subjective that’s easy to dismiss.”

When she started at Zeitspace, Pollock says she dreaded critique because she didn’t want to show unfinished work, but now sees its value.

“I’d rather receive critique and feedback on something that’s not done rather than something that I think is finished but doesn’t meet the design goals. I’d rather show something in progress that we’re all working together to improve,” she says.

Critique has been around for decades and is a well-understood design practice. But it isn’t as well understood in a UX context as the field has many disciplines where critique isn’t a regular part of the process, says Connolly.

And because UX is a young practice, standards for how to do UX design are still evolving and the industry has had to make things up as it goes — from job titles to critique, says Irizarry.

“But no one ever said, ‘Actually, this is what the design process should be, and critique could fit here, here, and here in that process and this is how you do it.’ We kind of just did it our own way. We just kind of winged it,” says Irizarry. But that’s changed in the last several years as the industry has matured, he adds.

Part of that maturity comes from schooling. Where designers once came from various backgrounds, UX design has emerged as its own discipline in universities.

But the diverse backgrounds of the designers at Zeitspace is valuable during critique.

Hoek says he’s able to get other perspectives from designers who have more experience or different backgrounds and who think of something he hasn’t.

“When you’re designing, you can get tunnel vision and get locked into a certain way of doing things, but design critique forces you to present your designs to other people, which can be helpful to get a different set of eyes on it from others who have different perspectives,” he says.

“Many times when you’re head down on a product, those critiques are an important time to get people’s eyes on your design and find out whether you may have missed something,” says Visser. “Even as a seasoned designer you can forget about things when designing, but in critique someone might say, ‘Hey how about this?’ And you go, ‘Oh yeah, I forgot about that.’ ”

What critique is not

Part of the beauty of critique is that it’s not subjective — the point isn’t to offer an opinion. It’s to think about the design objectively and approach design work in an analytical way. And this is where critique gets its power.

“One of the things that really puts critique in a position to help designers really improve their designs and their relationships with their partners is when you have a structured framework,” says Irizarry.

That structure helps designers think about what kind of critique they’re looking for in their design and get better insights. And it can save time, Irizarry adds, because the information is crisp, concise, and clear so you don’t have to have another meeting to follow up.

Critique also isn’t a feedback session with your manager. Everyone’s critique matters — one doesn’t weigh more than the other.

If you don’t have the structure that design critique provides, sometimes it can be the loudest person in the room, or the most assertive, or the one with the highest pay that gets their way, says Hoek. But design critique is about levelling the playing field, he says. It means whether you’re a manager or a co-op student, your critique is considered equally.

And, importantly, you’re not offering solutions in critique. The beauty of critique is that someone isn’t telling the designer what to do. It’s up to the designer to consider the critique and then change the design how the designer sees fit based on the project’s goals and objectives.

Visser was taught how to give constructive feedback all through design school, part of which included offering solutions.

“But design critique is a very different process,” he says. “It’s definitely something you can learn and if everyone practices it the same way, it’s easier to roll out across an organization.”

Unlike design reviews, which focus on presenting a design to clients and getting approval, critique is done internally.

The difference between design review and critique is that while they start the same, one is trying to fix problems, says Reynolds. Design critique isn’t about fixing, it’s about how the design aligns with the project’s objectives. In a design review, there’s less learning but in a critique it’s all about asking why, says Reynolds.

“You’ll get a better solution down the road through the critique process by understanding the designer’s process. You’re getting inside the designer’s head by taking the time to understand the steps,” he says.

And critique isn’t limited to designers. Irizarry calls it a life skill.

Critique is about building a shared understanding of the design process.

Visser says critique has helped him build a shared understanding among team members, but also build a vocabulary that the team uses when speaking to clients. Everyone is using the same words, which is important, especially for clients, says Visser.

For Irizarry critique is about communication. If designers can talk about their work, he says, they’ll be better able to communicate the business value of design. The industry has spent so much time over the last several years talking about design getting a seat at the table to show it’s business value.

“Well how are we going to get there if we can’t talk about our work in a way that helps people understand where we’re going? And even if we are, through critique we can show the process of how a design got somewhere and how it actually is rooted in the goals of the business and the customer and that’s where we’re showing the impact,” says Irizarry.

It’s important for designers to be good at critique because then they’ll be better at their jobs, says Connolly.

Where to start with design critique

OK, you want to try critique, so where do you begin?

Irizarry recommends starting with a small group. He points to an idea first introduced by Russ Unger called critique buddies. Designers are paired together for a quarter at a time and meet once a week to give each other feedback. It gives people a chance to practice talking about their work in a protected space and worry less about whether they’re doing critique in the right way. Then they can take those skills and bring them to a structured meeting.

“While that’s happening, I believe it’s really on the leadership of the design group to go to the partners and say, ‘Hey, here’s this program we started with our team where we want to ensure that we’re refining and putting our best food forward. We would love it if it makes sense for you to join us in this and maybe we just do one once a month’.... So it’s like sharing with them why it would be beneficial and making it clear that this is the value we think we’ll get from doing that and even asking them to just pilot it,” he says.

And, just as importantly, focus on the intention of the critique, says Irizarry.

“If someone gives you feedback that something you tried to implement isn’t working, you’re still probably a good person,” he says. “This is about improvement, not judgment.”

“It’s important to remember that just because your work is being critiqued, it’s not a critique of you. The more you open up your designs and get critique the better they’ll be. Young designers tend to say, ‘Oh, it’s not done yet’ and not show their work. But it’s more valuable to get feedback along the way. Don’t just hide them and show them when they’re done,” says Pollock.

So when you’re getting critique, remember to:

And when you’re giving critique, remember to:

After the critique, reflect on any solutions you may have gained, think about any solutions that could work based on those insights, and run your design through another critique.

“The only way to get better at critique is to do it a lot,” says Pollock. “You can read the book, and study the framework, but until you’ve practiced giving someone critique instead of feedback, you’ll never fully understand it.”

Innovation in an era of uncertainty

How to run a user story mapping session remotely

From a grocery store to a kitchen: How Kitchener Public Library is increasing tech and digital literacy in Waterloo Region.

User story mapping is a simple approach to help agile teams see the big picture when it comes to product design.