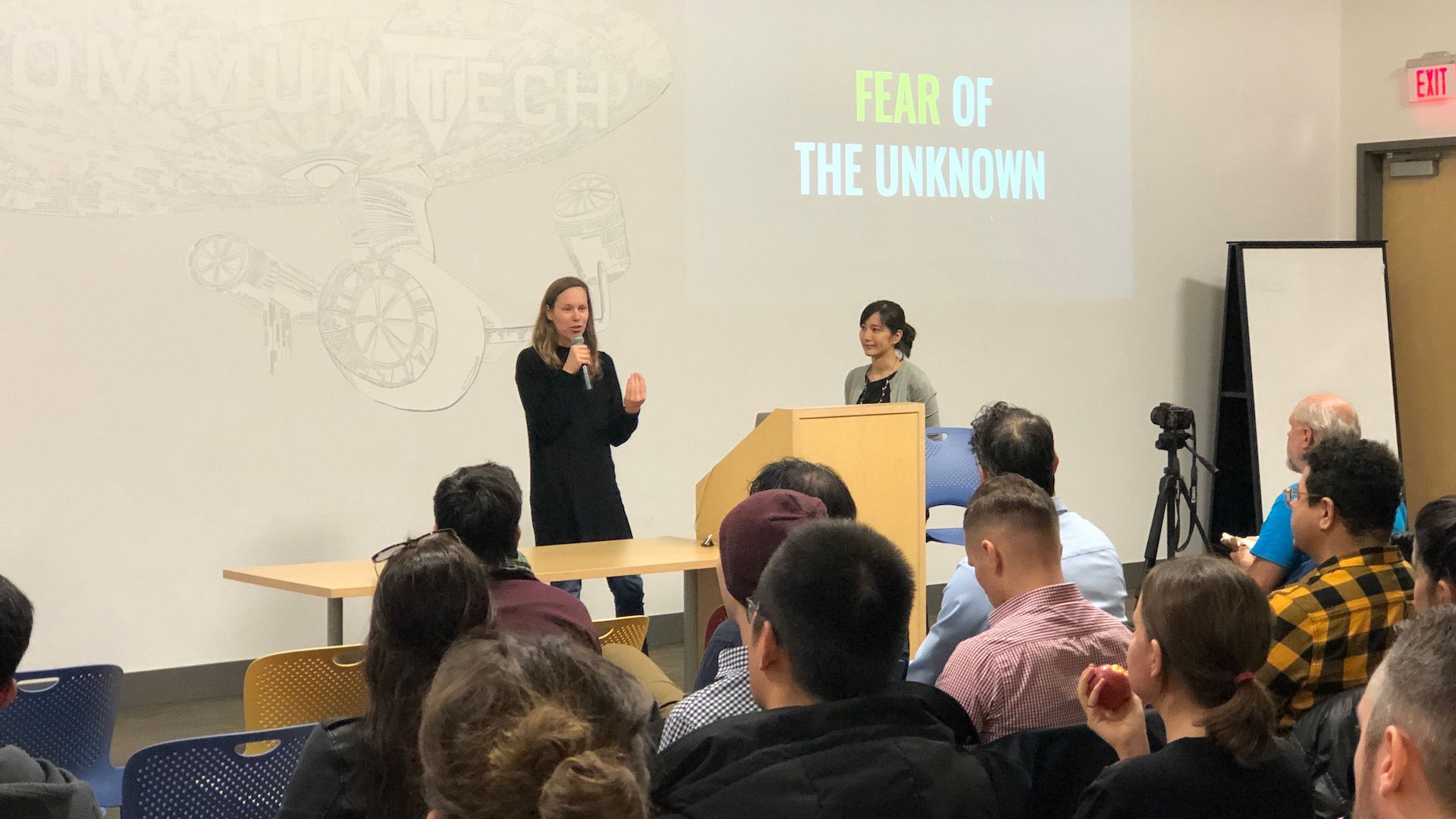 Here’s one easy way to level up your UX knowledge

If you’ve ever thought about levelling up your knowledge when it comes to learning about user experience design, there probably isn’t a better place to do it than Waterloo Region.

Along with a strong tech community and a host of organizations, which each have their own events, there are also groups, such as uxWaterloo, which meets once a month.

Zeitspace partner Mark Connolly co-organizes uxWaterloo along with Adam Euerby, product design lead at Dozr, Inc. The free monthly meetups focus on sharing experiences and knowledge from those in the field.

“It’s been instrumental in putting UX onto the map here in Kitchener-Waterloo since it’s such a thriving tech ecosystem,” said Euerby. “There was a need for UXers to find a place to call home.”

But you don’t have to be a UX designer to attend — anyone interested in UX design is welcome.

There’s a growing interest in UX, said Euerby. Often it’s from product managers or people who are just breaking into the field and had previous careers in graphic design, marketing, or software development.

While UX is growing as an industry, some designers find themselves the only UXers working at their organizations. The meetups give them a place to connect with others in their practice.

“It can feel like, ‘Is anyone else out there doing this?’ ” said Euerby.

The latest installment of uxWaterloo featured “community shorts” — short talks by five different presenters about everything from working with a remote team of developers as a UX designer to philosophy and UX.

Kimberly Tee and Julia Thompson, senior UX researchers at Shopify Plus, told the crowd how they used research sprints to get their whole team up to speed on a new project.

Just like a design sprint, they tackled their research sprint over five days. They set up a template where the team could “dump knowledge,” said Thompson. Their approach for each sprint was to research, summarize, and share what they had learned.

The benefits were that the team was able to learn enough to have informed conversations with users, said Tee. It also gave the team an initial shared understanding and helped build momentum.

“We were a new team working together. Working toward a shared goal really brought us together,” said Tee.

It also helped them bring their whole team up to speed quickly and understand where they needed to dive deeper, she said.

Tee and Thompson weren’t the only ones to talk about research that evening.

GreenLearning, which provides free online education programs about climate change and the green economy, turned to user research to understand why the number of teachers using the site had dropped.

“Sometimes when you think you know your users, you don’t,” said Caleb Williams, a digital product designer with the company. “We didn’t know our audience.”

So GreenLearning recruited teachers for usability testing on its site. But the teachers came, picked up educational resources, and left. That’s when the company decided to run focus groups.

The focus groups were an eye-opener, said Williams. GreenLearning asked the group to navigate to its site and find teaching activities.

“It took one group 25 minutes and eventually they gave up,” he said.

That prompted GreenLearning to change its site. It’s still a work in progress, but taking the time to do the research changed everything, said Williams.

“If you don’t know how your users think, you’ll never know how to design for them,” he said.

The “community shorts” are another way to help the UX community grow and learn about who else in the community is doing UX-related work. The short talks are a low stakes opportunity for UX designers to share what they’re working on and how they practice design, said Euerby.

“By sharing their story it sends a signal to themselves and the community that UX is an important job to do,” he said. “It all just kind of builds on itself.”

uxWaterloo is affiliated with Communitech’s Peer2Peer Network, which helps those in the tech industry share their knowledge and experiences to help others, and is the local chapter of the Interaction Design Association.

The next uxWaterloo meetup is December 19.