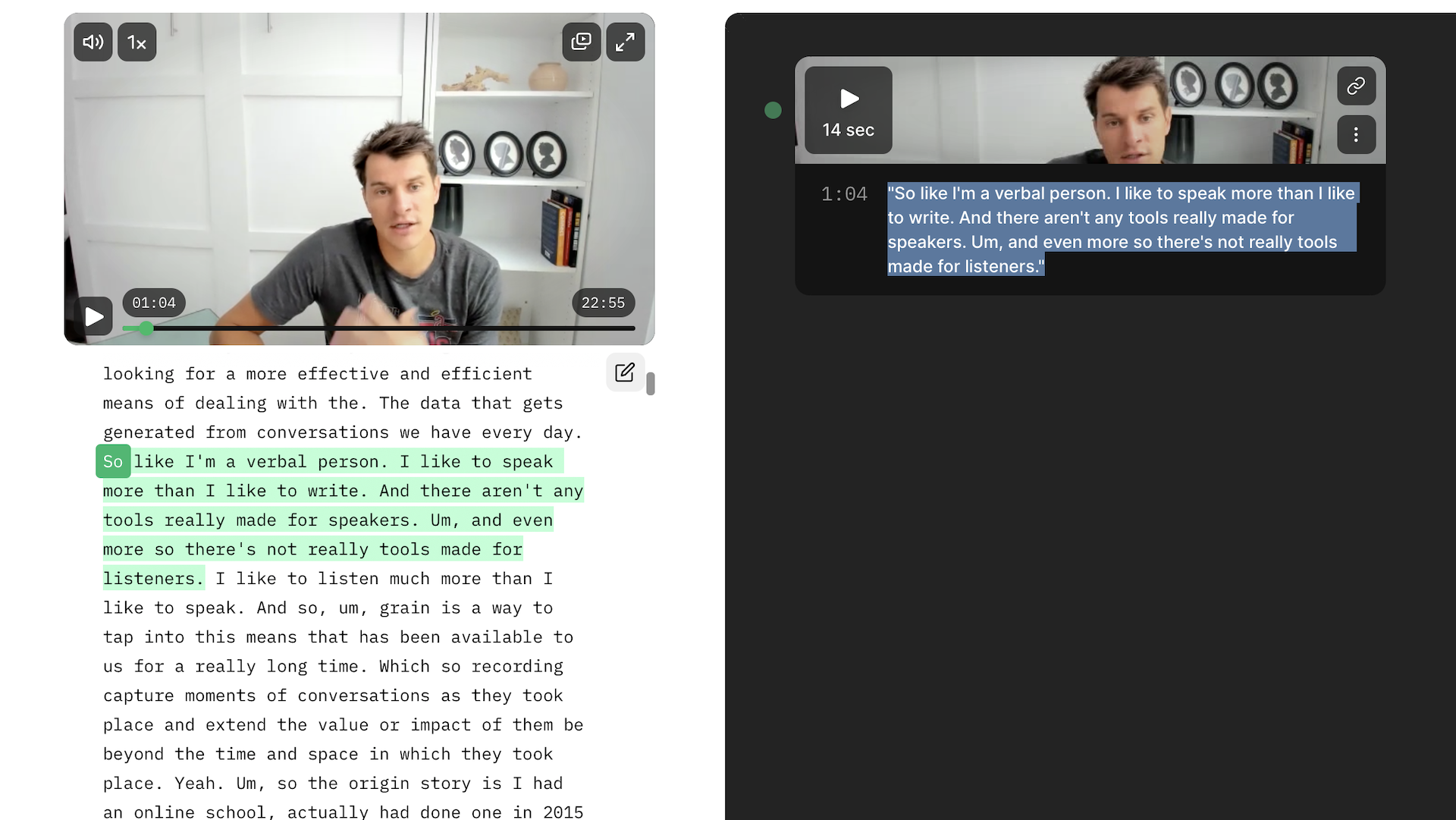 From job titles to tasks: How Grain refined its product strategy with success

Mike Adams and his brother, Jake, had been building their new startup Grain for more than a year. The app, which lets people share quick video highlights from recorded Zoom meetings, had been growing quickly. Grain had just finished a round of funding where they had raised millions. Everything seemed to be going well.

But then, Adams and his brother realized something “devastating” that would change the company they co-founded together: They were building for the wrong people.

“Nine months into that development, we realized that we had never defined a user that we were going after. We were trying to be all things to all people,” said Adams.

For most of 2019, they had been asking themselves and their team, who is Grain for? They came up with job titles. Thinking about Grain’s users by their job titles though never answered any questions for them, said Adams. But when they started thinking about how Grain would fill certain jobs to be done — tasks, not job titles — they started gaining traction.

“We were like, ‘Oh my gosh, had we known whose problem we're really solving, we would have approached this problem completely different,’ ” Adams said. “So we started over from scratch entirely.”

They threw out nine months of code and spent three months transitioning Grain from one core user to another.

“It was absolutely the right decision for us,” said Adams.

Grain started its revamp by breaking “jobs to be done” down into two core ideas: extractors of information (people like user researchers who draw out information during a research interview) and distributors of information (people who share information, like in a webinar or virtual conference). Extractors really benefited from Grain because the combination of a transcript and ability to share short video highlights was really powerful. So the co-founders shifted their product strategy to focus only on extractors. And that meant hitting the reset button and transitioning Grain to focus on people who use it to draw out information. (Zeitspace uses Grain to share bite-sized user research highlights with stakeholders.)

“Once we did it just changed everything because we built all of our product decisions and we were able to say, is this this type, or is it this type? Whereas back in the world, when we were just like, is it the customer success manager or is it the consultant, they were never defined enough for that to actually be meaningful in the product decisions that we were making about who we were trying to serve. ‘Jobs to be done’ changed everything for us,” said Adams.

Thinking that way has crystallized Grain’s product-market fit, he added.

The change has been a good one and Grain relaunched a year ago. Since then, Grain has grown and was named one of the five hot video app start-ups by Computer World.

How it all began

The story of how Grain started actually began five years before the software product ever launched publicly, when Adams had founded another start-up, MissionU in 2015. MissionU was also built on Zoom and Adams started recording the virtual conversations. He didn’t know if he’d make use of the recordings but thought maybe he could use them at some point.

“We recorded everything and it turned out it was absurdly useful to us. We use them [the recordings]  to make better admissions decisions,” he said.

MissionU was acquired by WeWork in 2018. Adams didn’t want to join the organization but he thought he had the seed of something with the recordings. Everyone was having virtual meetings and they were only going to have more and would need specialized tools for listening and collaborating that went beyond document editors and note taking. He thought he could build a software product out of those recordings and in late 2018 mentioned it to his brother, whose team at another tech company were struggling to communicate. Jake was hooked and in 2019, Grain took flight with a small group of private beta testers. (It would later go public in early 2020, months before the pandemic began.)

The pandemic only accelerated Grain’s growth as many people began working from home and virtual meetings became the norm.

“So we were kind of like already going to where we felt like the puck was going and then never would have imagined a global pandemic,” said Adams.

The pandemic meant that the growth that would’ve taken Grain years to hit, actually happened in months.

But when you’re building your product on another company’s platform — like Grain did with Zoom — there are always challenges. “It's always challenging to be in that pioneering frontier group, especially when it's such a core part of the user experiences,” said Adams.

Grain was one of the first Zoom app developers and there are limits when building on someone else’s platform, such as permissions, reliability, and stability. Now Adams said Grain has grown into its own, as an independent service that still works with Zoom, but doesn’t completely rely on the platform.