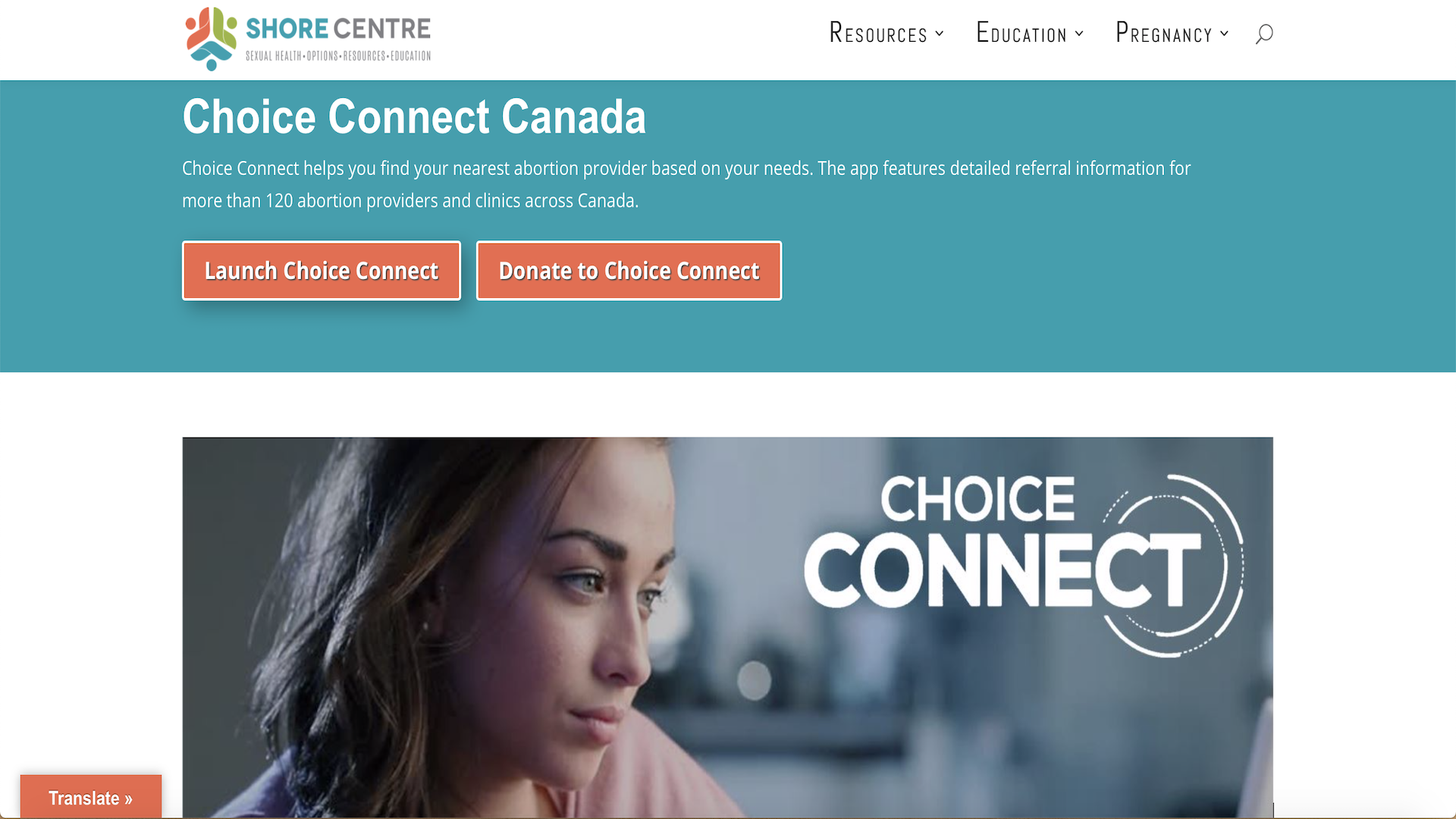 Three Ontario communities will be getting better access to abortion services thanks in part to data from the Choice Connect app that has helped highlight gaps in abortion providers in the province.

SHORE Centre (short for Sexual Health Options Resources Education) is working on a project where it will build partnerships with Ontario communities where people are looking for increased access to abortion and pregnancy support. Part of the process is using anonymous data from the Choice Connect app that Zeitspace helped SHORE build to better understand where people are looking for abortion services and how far they’re travelling to access them.

“Data from Choice Connect has been so incredibly useful because we were able to look at it and say, ‘OK, in Ontario where are we getting the most requests from? Where are folks looking for providers most commonly?” said TK Pritchard, SHORE’s executive director.

The multi-year project — which is in its first year — has focused on three communities, one in northern Ontario, and two that are more central. The communities have little or no access to abortion providers.

Choice Connect is a web-based application that refers people to abortion services. Though the app tracks communities where those requests come from and nearby providers, the people asking for the referrals are anonymous — the app doesn’t track who they are. The app made more than 6,000 referrals last year across Canada.

SHORE has been using the anonymous data from Choice Connect to see where abortion services are most needed. The non-profit has also been prescribing medical abortion via telephone to people across the province in communities where people don’t have anywhere else to turn, a service SHORE can’t sustain, said Pritchard.

But SHORE hopes to build capacity across the province and is developing partnerships in places that need abortion services. That may mean partnering with a clinician who is willing to prescribe an abortion pill, Mifegymiso, and work with clients but may not have protocols in place or access to a counsellor if people need one.

“We would help build that partnership and the pieces in and around medication abortion that they might need information for and build the relationship with them to help build services in that community and then they would become a new provider on Choice Connect,” said Pritchard.

The approach would look different depending on the community, said Pritchard. Some communities in northern Ontario have significant Indigenous populations so it’s important to ensure those services are culturally appropriate and representative of the community they’re in, Pritchard said.

And while SHORE is working with three communities, the reality is that there’s a significant need for access to pregnancy option support and medicated abortion in Ontario, Pritchard added.

“We wouldn’t get 6,000 people logging on to Choice Connect if it was easy,” Pritchard said. Medical abortions are safe and effective but it can be difficult to access the services outside of urban centres in Canada. Some people drive hours to get to a provider and some have to fly to access services.

“There are significant gaps in access so I’m really hopeful that this project could be a way for us to demonstrate that you can do this in your community and it is possible,” said Pritchard.

“So we can use Choice Connect as an advocacy tool to help communities see why they need to build those services and make them accessible,” said Pritchard.

More people are seeking abortion services during the pandemic

The pandemic is playing a role in the increasing number of people seeking abortion services. From January to March 2020, Choice Connect provided about 380 referrals a month. After March, those numbers jumped to an average of 550 referrals a month. Part of that increase could come from people looking for another provider because they’re worried that their healthcare provider will have long wait times because of COVID, said Pritchard.

And some health services in Waterloo Region and beyond have started limiting their services, putting pressure on smaller organizations like SHORE.

Tubal ligations and vasectomies were deemed non-essential, so someone may be seeking an IUD instead or a prescription for birth control and turn to SHORE to get one, Pritchard added.

SHORE isn’t done revamping Choice Connect. Last year, Zeitspace worked with SHORE to translate the app into French for Francophone users and added notes around which clinics have an accessible washroom and are trans inclusive as well so clients can see if the clinic will be a safe space for them.

Pritchard said SHORE is considering having the app translated in other more commonly-used languages as well and is also looking at what other information Choice Connect could provide, such as which pharmacies stock medication their clients seek.