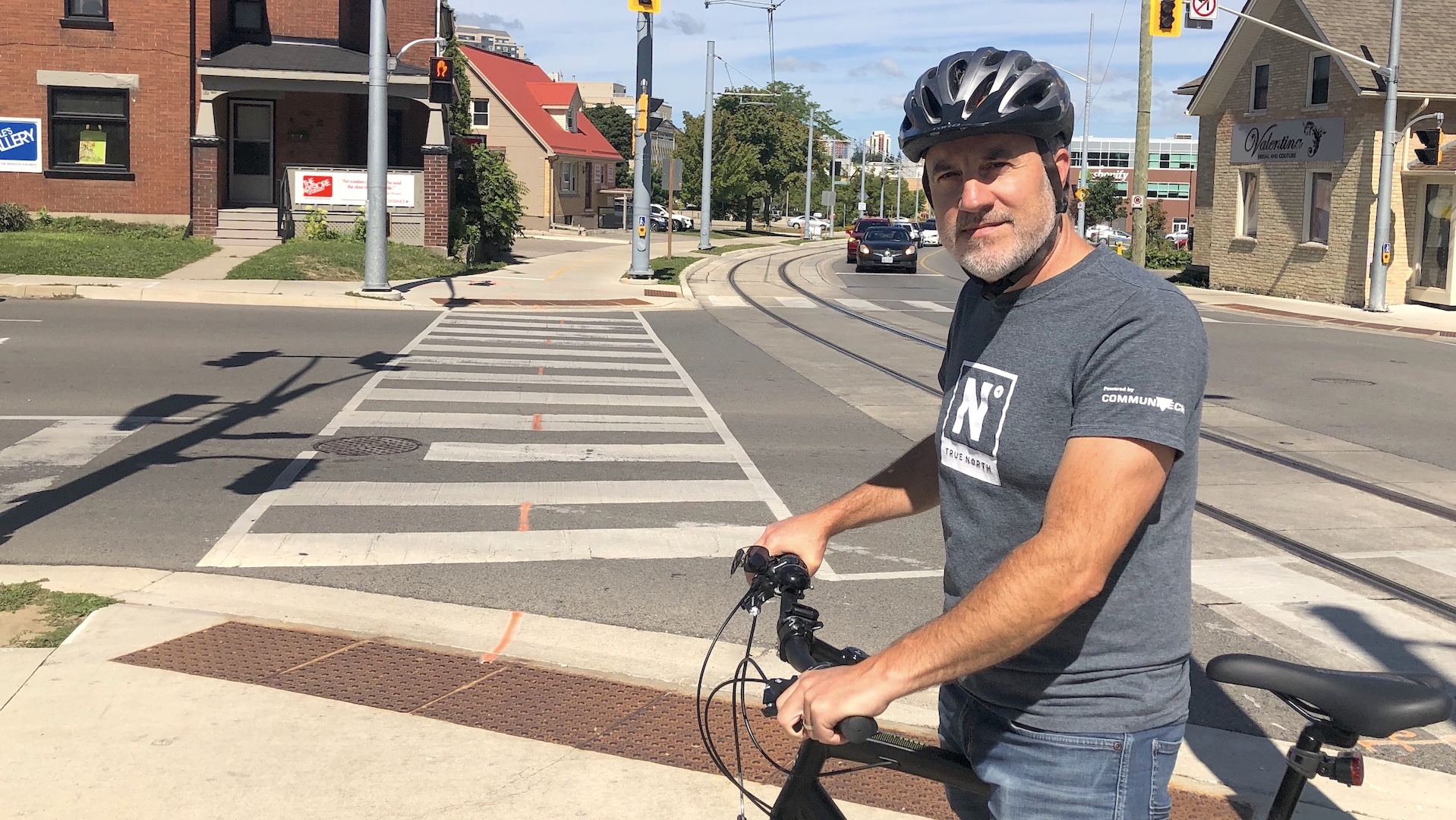 Cycling and walking in Waterloo Region: let’s just get on with it

Here at Zeitspace we’re big fans of the ION LRT line and of biking and walking. As previously written, proximity to multi-use trails and an ION station were big reasons for us choosing our office location. We believe that these modes of transportation are an important part of a healthy lifestyle. Being able to choose to walk, cycle, or ride the ION safely to work matters to us as a business and as people. There’s far more that could be happening in Waterloo Region to support cycling and walking as a part of daily life. Our friend Tony Reinhart recently had a dangerous near-hit while cycling just blocks from our office, and he wrote about it in a thread on Twitter. What he wrote resonated with us, and with his permission we’re reproducing it here.

I had a close call with a driver while on my bike today and wound up palms-down on the asphalt. It happened as I crossed William St. at Caroline in Waterloo. I was northbound on the multi-use trail, crossing William, when the driver made a right turn in front of me.

He honked his horn at me, unaware he was turning into a trail crossing, and clearly thought he had the right of way. To avoid a collision, I braked hard and fell forward to the pavement. I then got up and told him, through his closed windows, that he was crossing a bike trail.

He made a weak hand gesture suggestive of an apology and drove off as I collected myself and continued my ride home, rattled but thankfully with only a couple of minor scrapes. The episode crystallized several things I had been thinking about recently, such as:

In these situations, people on bikes and on foot are far more vulnerable and have much more at stake than car drivers do. I regularly use all three modes, so I know. This physical fact underscores how misguided and dangerous  incessant debates about “shared responsibility” are.

Since drivers pose the greatest risk to others, logic dictates they should carry a greater burden of care. Our laws as written reflect this, to a point. But our culture — our lived reality — does not.

Our culture is one that casually accepts weak enforcement, driver entitlement and general favouritism of motor vehicles over other modes of travel. That favouritism endures despite the huge and demonstrable costs it puts on every one of us, drivers and not.

We pay through the surrender of our public space for roads and parking. We pay through disease-inducing pollution and climate change. We pay through our stress and our time stuck in traffic. Far too often, we pay with our lives. Yet somehow, we accept these costs and drive on.

It’s not a great leap of logic, nor does it require a lot of deep thought, to see that we can’t continue down this road. But continue we do.

We spend billions adding lanes to the 401, knowing they’ll just fill up. We build an LRT to reduce car trips, then apologize to drivers by widening Weber Street into an urban speedway. Meanwhile, we squeeze cyclists onto multi-use trails instead of building segregated bike lanes.

These trails are essentially glorified sidewalks — and we already know sidewalks aren’t great places for bikes. Calling them shared paths and painting a yellow line down the middle doesn’t change the facts on the ground.

And the facts on the ground are this: pedestrians feel endangered by speeding cyclists, cyclists feel frustrated by oblivious pedestrians, and drivers on the adjacent road are often clueless (or merely careless) in failing to yield to people on the path when turning to cross it.

In short, we have failed, and continue to fail, to build safe and effective infrastructure for people who don’t drive cars in our community. We fail even though we know walking and biking are healthier and collectively cost us far less money than driving. Why do we fail?

After my utterly banal close call of today, all I know is that I’m a lot less likely to ride my bike on our roadside multi-use trails, and that I’ll be a lot more wary about riding in general until our leaders get serious about changing the local transportation culture.

Pilot projects, small-scale experiments, piecemeal implementations and years-long consultations won’t get us there. Bold vision, expertise (from elsewhere, if need be), region-wide execution and serious budget priority will. So let’s just get on with it.