They say a picture is worth a thousand words, and at June’s uxWaterloo, Brian Doucet, and Michael Doucet showed us just how photography can be used as a primary source for urban research. This father-son team has put together a book of Toronto streetcar photographs from the 1960’s and present day, to demonstrate the change in Toronto’s urban landscape as well as the economic and social implications of these changes. Streetcars and the Shifting Geographies of Toronto: A Visual Analysis of Change aims to shift conversations about urban planning, gentrification, and housing availability using the power of photography.

Often when it comes to research, photography is seen as complementary, but repeat photography is frequently used as a primary source for studying things like glacial changes, and is increasingly being used to study urban change. “I think there is an appetite for different kinds of methodologies…to include things that aren’t just statistics” said Brian.

There are a lot of things that pictures can tell us, but photographers also have their own perspective, can have an agenda, or might simply leave information out of the picture. Michael and Brian chose photographs of streetcars to try and curb these potential biases. Toronto has a dedicated group of streetcar enthusiasts who have been taking photographs consistently for many years. Also, unlike photographs in a newspaper, they are often showing a day to day view, rather than tell a story or show a specific scene to support an article. 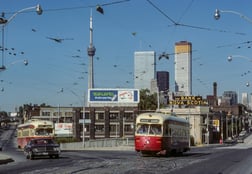 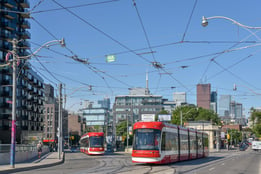 Of course, even using streetcar photographs, Brian and Michael had to think critically about what they were seeing. It would be nearly impossible to fully understand the context or conditions in which the photos were taken, and there is no information about anything outside of the frame itself. Often photographers try to take a picture without people in the way, but that doesn’t mean that there weren't a lot of people around at that time. They also tend to photograph particular oddities, or streetcars on interesting streets. All of this explains why Streetcars and the Shifting Geographies of Toronto: A Visual Analysis of Change also includes over 100,000 words of text.

A highlight of the uxWaterloo talk was when Michael walked the group through some of the photographs from their book. He showed a picture of the Yonge St. and Dundas St. intersection in the late 1960’s with the Brown Derby Tavern, and then a current picture that shows movie theaters, shopping, electronic billboards, and people wearing masks at the scatter crossing. He also showed a picture (shown at the top of this post) of Church St., south of Carlton St. in 1967 that showed a huge cigarette ad on the side of a building, and Maple Leaf Square, where the Toronto Maple Leafs were still playing. The present day picture had similar buildings, but the ads had changed, and the Leafs were no longer playing hockey in Maple Leaf Gardens, which is now a Loblaws.

Many of the other pictures highlighted the drastic changes in the Toronto skyline, and the growth of the city center. Other photographs showed a more subtle change in some areas, such as the removal of television antennae from house rooftops. Brian mentioned that it’s important to put in photos that underscore, for all the skyline changes that have happened, much of the city has really remained frozen in time

Michael pointed out that there is nothing natural or inevitable about these changes; they are all an outcome of the economic changes of the city. The Toronto population used to be mainly around the city center, whereas now those areas have been gentrified, and are no longer affordable for many people. The lower-income population is no longer concentrated in the urban core, but has shifted outwards to places like Mississauga and Brampton. This is a pattern that Kitchener-Waterloo is also familiar with. As buildings are being redone in the urban core, lower income housing is being pushed outwards.

“Lower income people are left searching for cheaper housing, but truly low income people have been left to fend for themselves, which is why we have such a problem with homelessness in Toronto” added Michael.

There is a lot to be learned by examining photographs over time, and noting their differences but also their similarities. After working on their book, Brian has now started taking pictures of different areas.  “Maybe when I’m my dad’s age, I can publish another book where the pictures I’m taking now are the before pictures.”

Of course, that book won’t be out for another 50 years, but Brian was quick to point out that “good research takes time”.

Megan Pollock is a UX designer at Zeitspace.