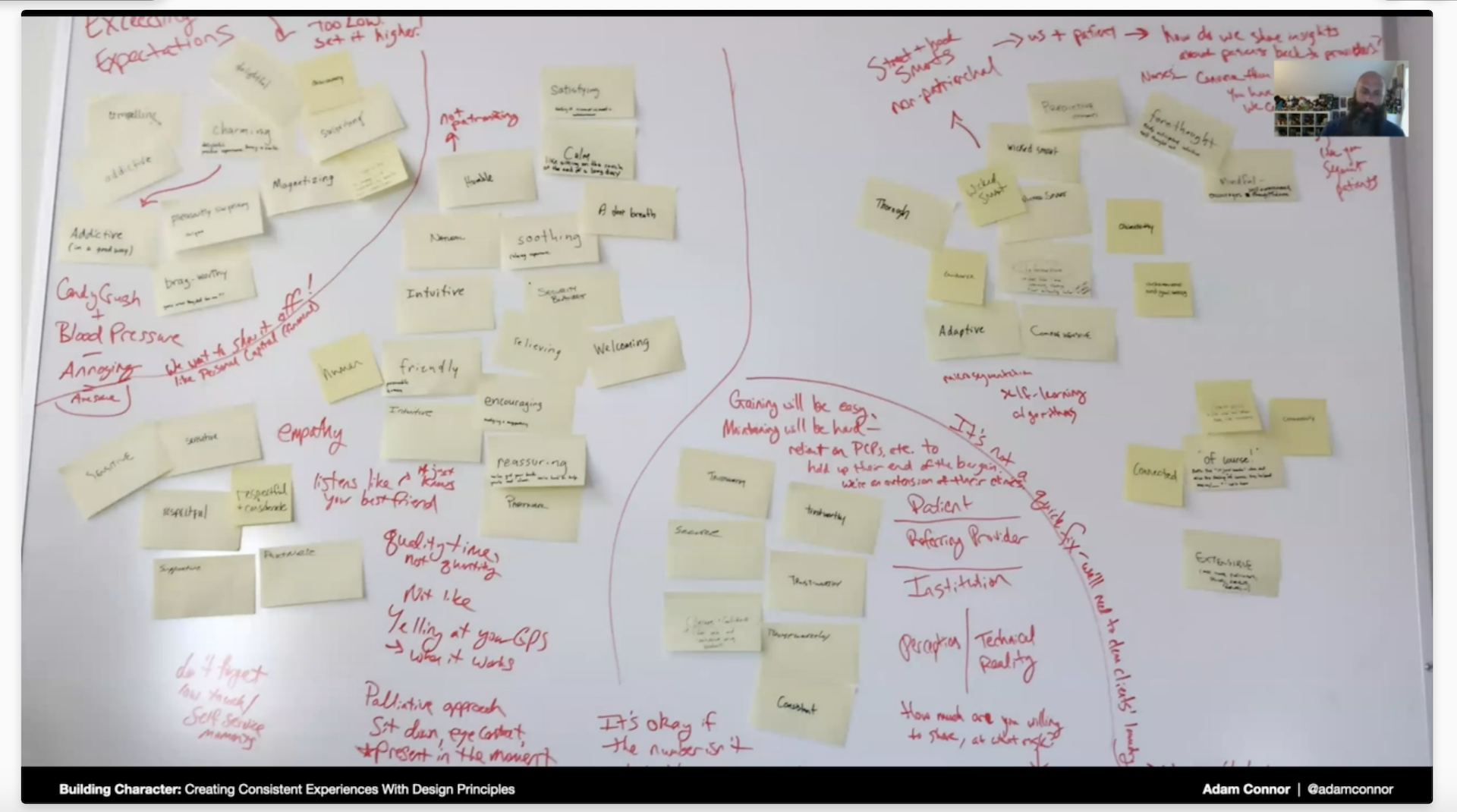 In Story Genius, author and story analyst Lisa Cron writes about how the key to a good story that grips your reader isn't the plot, but the character. The character and their internal struggle becomes the live wire, the guiding principle for how the character behaves and the decisions they make, writes Cron. If something doesn’t touch that live wire, it shouldn’t be in the story.

There’s a lot that user experience designers can learn from storytelling and how authors and filmmakers build character.

“Storytellers have developed lots of ways of thinking about character and how to encapsulate it,” said Adam Connor, head of experience research and design at Elixir, a strategy and design firm based in the U.S.

Connor, who co-wrote Discussing Design: Improving Communication & Collaboration Through Critique, spoke at Fluxible 2021 about using storytelling concepts to build character into designs and solutions. Designers can use the principles of storytelling around developing a character and adapt them to the design principles they use to guide decisions around what they’re designing and why. And there are lots of ways that storytelling offers guide posts for how to do that.

Let’s look at an example from the film world. In the movie The Big Lebowski, the character of The Dude, is played by Jeff Bridges. The Dude is a laid back character who finds himself in the midst of a series of mishaps — he is mistaken for a millionaire and assaulted as a result. When he tracks down the millionaire, he finds the millionaire’s wife has been kidnapped. The Dude is then tasked with delivering ransom money, but one of his friends wants to keep the ransom. The juxtaposition of The Dude’s laid back personality combined with the situation he finds himself in is what makes the movie so entertaining, said Connor. The Dude’s personality dictates the decisions he makes around the kidnapping and the ransom and hilarity ensues.

“Defining the personality or the character really can contribute to decisions around what a character does in a given situation,” said Connor.

In short, the personalities of the people we’re designing for, and how those personalities dictate what they’d do in a given situation, should inform our designs.

If you think it’s too challenging to apply the concept of character to a design, Connor offered a few examples of how some tech companies have done just that.

On the surface, Vimeo and YouTube are similar platforms. Both have features that allow users to watch videos, comment, like, and share. But Vimeo emphasizes quality content over quantity. It was a platform built for people creating high-calibre content who didn’t have a place to share it. YouTube, on the other hand, is focused on building community and so the platform is more focused on volume of content. You can see that principle at play in design decisions, said Connor. When you watch videos on YouTube, the platform suggests what to watch next. Both Vimeo and YouTube are successful, said Connor, but each platform is designing for a different character.

A great example of a design principle that encapsulates the character of a solution is “fast” — one of Google’s design principles. For Google, every millisecond counts. That may seem basic, said Connor, but when you think about how the company measures things, it really is about how responsive the search engine is.

“We can use principles to really make judgement calls and make decisions around actions.”

So how can designers come up with design principles that help define the character of a solution? First, use the research you already have from talking to people about their experiences using your product, but also about how they wish things were. If they needed help with something, how would they want the person helping them to treat them and talk to them?

“We can use that research to really understand: If our solution was a person, what type of person would our audience really want to have helping them solve the problem they have?” asked Connor.

If your organization has a mission statement or brand identity, part of the answer to that could already exist there. And you can look at the shared values of the organization and the team designing and building the product or service for other hints. How those things come together can form a real point of view on what the solution’s character should be, said Connor.

If you’re still struggling to come up with those concepts, Connor suggested doing a vocabulary workshop with your team. That’s where the team comes up with adjectives that describe the solution and then maps them out on sticky notes and a whiteboard.

You can also work backward, he added. Look at what else your team has designed and find common patterns that you want to build on — or shift away from. Roleplaying a situation always helps, he added, as do character sketches, such as thinking about the first thing someone would notice about your character, and what’s important to your character and their identity.

Once you have that, be clear and direct about your principles — like Google’s every millisecond counts. If your principles are too broad and use words like “fun” and “engaging”, Connor said you really haven’t defined those principles. He likes to write principles as a short statement, followed by one or two sentences that help explain it better. That way the principle acts as a filter — it doesn’t just guide what you will do, but what you won’t.

Design principles should help your team have strong, focused discussions throughout the project. And as your project evolves, so too should the principles. Whenever you learn more about your audience and their needs, your principles should change to reflect that, said Connor.

Design principles are really about directing our action toward a vision, he said. We're telling a story and design principles help us understand our character, how they’ll behave and the actions they’ll take as they work through their own internal struggle. That is the genius of story and it’s the value of design principles.