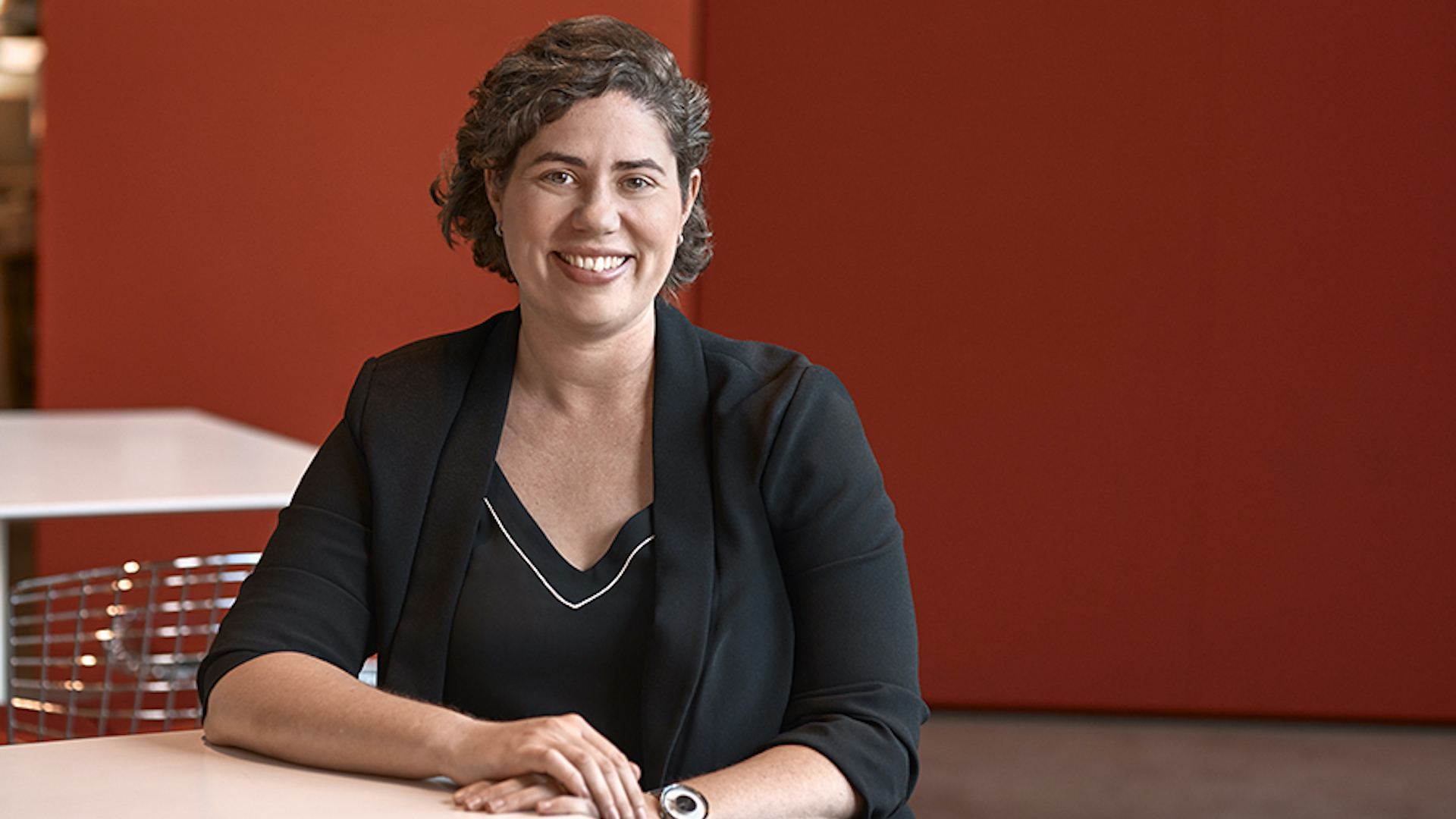 When she began working as an architect, Erin Corcoran didn’t have a lot of “money” shots of the work she’d done. Her most visible project from her time in the region is the metal sign at the University of Waterloo. The sign used to be at the corner of University Avenue and Ring Road, greeting visitors as they entered the campus, but it’s since moved because it became such a popular selfie spot that people often stood on the road to snap a photo. User behaviour dictated how and where Corcoran’s perhaps most highly visible work in the city would appear.

The sign has since moved to a new spot with plenty of runway for people to stand back and snap a selfie — something Corcoran, a design strategist, got to see for herself when she was last in Waterloo in August.

It wouldn’t be the first she got to see how people interacted with something she’d designed.

She was in Las Vegas recently checking out a new venue Gensler — the global architecture firm Corcoran works for — designed when she noticed fading on the exterior walls by the main entrance.

Thinking the building was having trouble with graffiti, she wondered aloud if they should think about different materials that could wash off more easily. But the building owners told her it wasn’t graffiti at all, it was that people often stood in line for a long time to enter the venue and inevitably put a foot up against the wall while they scrolled through their phones. The behaviour was happening enough times that it created a wear pattern on the wall — even though the venue has only been open for a few months.

For most people a wear pattern may just be a wear pattern but for Corcoran it was a key clue that told her two things: First that the building was well used, and two, that people needed a place to sit outside while they waited to get into the venue.

“This made my day,” she said of seeing the wear pattern. “I went to Las Vegas, there's plenty of fun things in Las Vegas, and this was one of the things that made my day — discoloured paint. So that just gives you a sense of sort of where I'm at as a designer. I'm also really curious on what are those factors that make buildings feel right, and what are the elements of spatial design that make places feel unwelcoming or undesirable?”

Corcoran joined a recent uxWaterloo meetup to talk about the overlap between the design strategy architects use in their work and UX design.

A big part of her job, said Corcoran, is working with people who will use the spaces she designs to figure out what they need from the buildings. If you’re a UX designer or researcher, that probably sounds very familiar. And that’s because it is — most of Corcoran’s talk revolved around how UX principles are also applied to buildings (though she also talked about how the pandemic has changed work spaces and trends that are emerging as a result — more on that later).

Just like UX designers and researchers often try to understand what it is about products that people connect with — or don’t — Corcoran takes the same approach to spaces. The Greenway in Boston, where she’s based, is one example. The area used to be an elevated highway similar to the Gardiner Expressway in downtown Toronto, but is now a series of parks, fountains, and a gathering place. People walking around downtown Boston tend to discover the Greenway accidentally and are drawn to it, she said.

“What is it about that space? Is it because it has variety? Is it because it's got good sightlines? Or is it because it's beautiful that draws people to it? And I don't have good answers for that. But I'm always delighted to find those spaces within cities that seem to really connect and then try to figure out how we can bring that into design,” she said.

It’s no secret that how cities are designed affects our mental health. One research team measured people’s mood in six Vancouver spots and found people in the research study were happier at a rainbow crosswalk and an alley with shrubbery, a bench, and a free little library than they were at a standard intersection and plain alley. It’s partly why there’s a push to bring beauty into urban spaces — more public art, fireplaces and seating, shorter buildings that help add softness to a city, and pedestrianized streets that give people a reason to spend time in a space and intuitively want to connect with each other.

That was true pre-pandemic but is even more true now, particularly as the pandemic has changed how and where people work.

Corcoran said part of Gensler’s work also involves workplace design. Even before the pandemic, Gensler had been using emerging technology that placed sensors at various spots, such as meeting rooms, at a workplace to track how often it was used. The software is now linked to new ways of working as more offices move toward hybrid work where employees may not be in the office every day. Part of the challenge is designing flexible spaces that allow people to work together, but that they can also navigate easily. So, if someone is booking a desk on a scheduled office day, can they coordinate with coworkers to book the same group of desks so they can work together on a project? Is there a way to easily connect with people who are working remotely?

Corcoran said Gensler has collected data from surveys showing one of the reasons people want to return to the office is to connect with their coworkers. That data may mean future workspaces include more spaces where employees can sit and work together. Designing for such integrated experiences is important, said Corcoran, because it helps employees have some certainty about what office work may look like in the future.

One of the ways Gensler is now thinking about who may use office space in a hybrid work environment will be familiar to UX designers: The firm is creating sample personas for clients.

“Planning for hybrid (work) is tricky,” said Corcoran. “People might say ‘I want to come in three days a week’ but how do you know how often people are going to come in?”

Gensler runs different scenarios based on different assumptions and uses data and predictive analysis to make informed decisions instead of just throwing darts at a board, said Corcoran.

The pandemic may have changed how office spaces are used and where employees work but that’s the only change from the last 18 months. For many designers the pandemic has also changed how they've approached their work. That's the topic of the next uxWaterloo, where UX designers and researchers will gather virtually to talk about UX research and design in the age of remote work. Sign up to join the conversation Nov. 18.

When user experience is everything